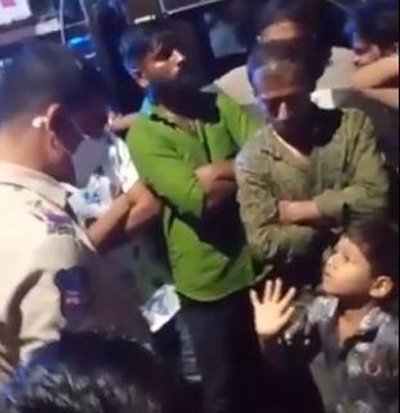 Everyone loves to dance to the tunes of DJ. Although there is no noise pollution in the city, the DJ has to be turned off after a certain time. However, once the DJ starts it is very difficult to stop it, especially when the youth is dancing. In such a situation, many times the police also have to stop the DJ on time by falling in the middle. Sometimes people also get into conflict with the police about this. One such case came from Telangana, where a 6-year-old boy ransacked the police for stopping the DJ. The video of this incident is becoming quite viral on social media. Whoever is watching the video is praising the courage of the child.

Actually, this video is from Sangareddy district of Telangana, where a 6-year-old child got into a dispute with the policemen for not allowing the DJ from the policemen. Police was not allowing DJ during Durga Mata’s immersion, due to which the child was questioning. The 6-year-old boy was asking the police the reason for not allowing the DJ. The police themselves were also surprised to hear his words.
The video of this funny conversation is becoming quite viral on social media. In which people are praising the courage of the little boy a lot. People are saying that this child really has a lot of courage. This child has done the work which the elders present there could not do.

Thieves entered the house, the landlord from America called the Kanpur police after seeing it in CCTV and then…

Thieves entered the house, the landlord from America called the Kanpur police after seeing it in CCTV and then…

If you need money, take me from me, don’t do such small roles – when Shashi Kapoor removed all the scenes of Amitabh Bachchan from the film. when shashi kapoor asked to amitabh bachchan to reject small roll | AnyTV News

This BJP leader took a surprising pledge, will not eat till the corona is destroyed

If you turn right in the pit, if you turn left then you are in the pit, Amit Shah cannot improve the Congress – said Sambit Patra