Russia-Ukraine War LIVE: Ukraine will get 2600 crore military aid from America amid the war with Russia, Zelensky turns down the offer to leave the country

by AnyTV
in Latest News
Reading Time: 5 mins read
0
A A 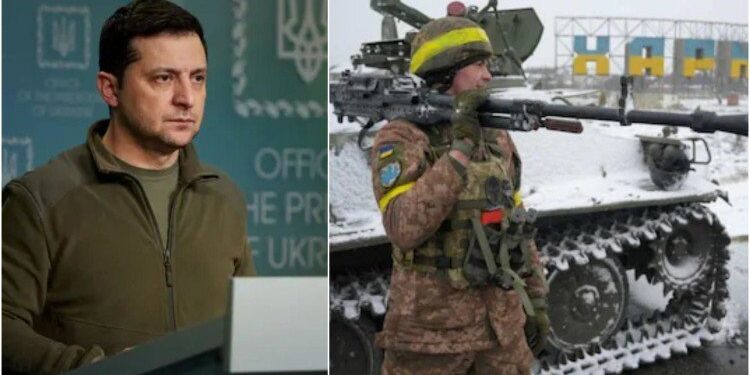 German Ambassador to India Walter J Lindner has attacked Russia over the Ukraine crisis. He said this is Putin’s war. It’s a shame this is happening. We will respond with economic sanctions. We cannot allow occupation of another country. We want an international community based on international law.

Social media company Meta has announced that advertisements of Russian state media will no longer be visible on any of its platforms. The company’s head of security policy, Nathaniel Gleicher, said: “We have also started targeting other Russian media groups. These changes will be in effect for the whole week.

Amid Russia’s attacks on Ukraine, Ukrainian Ambassador to the UN Sergiy Kislitsia called on all member states to pray for silence. He said that this prayer is necessary for the peace of the souls of those who have lost their lives in the Russian attack.

India has intensified efforts to evacuate its citizens amid ongoing attacks on Ukraine by Russia. An Air India rescue plane reached Bucharest, Romania on Saturday morning. This plane will return with Indians reaching the Russian border.

Ukraine crisis: Indian embassy’s appeal – do not go to the border areas without informing

Russia’s second Ilyushin 1I-76 military transport aircraft was shot down near Bila Serkva. This place is 85 km south of the capital Kiev. This information was given by two US officials keeping an eye on the ground reality in Ukraine. On Friday, the Ukrainian military said it had shot down a Russian military transport plane. According to a statement issued by the Army General Staff, the first 1I-76 heavy transport aircraft was shot down near Vsekiev, a city south of Kiev. The Russian military did not comment and the news could not be immediately confirmed.

Ukrainian President Volodymyr Zelensky was asked by the US government to leave the capital, but Zelensky refused. A senior US intelligence official said the Ukrainian president said, “There is a war going on here. I want ammunition, not travel. Know what Zelensky said by releasing the video…

After Russia’s attack on Ukraine, the Union of European Countries-EU has announced strict sanctions on Russia. Now America has also supported the EU in these sanctions. It has been told that so far a total of 30 countries, including the US, have come forward to impose sanctions against Russian President Vladimir Putin and his high officials. These sanctions are likely to cause further economic and diplomatic damage to Russia. Read here how the new sanctions will make it difficult for Putin and his allies …

Ukrainian lawmaker Kira Rudik has picked up a gun to stop Russian forces from moving towards Kiev. He wrote in a tweet, “I have learned to drive Kalashnikov and am ready to take up arms. Never thought that such a day would come. Our women will come forward like men to save the country.”

An Air India plane took off from Mumbai airport on Saturday morning for Romanian capital Bucharest to bring home Indians stranded in Ukraine due to Russian aggression. Senior government officials said flight number AI1943 took off from Mumbai airport at around 3:40 am and is expected to reach Bucharest airport at around 10 am IST. He said that Indian nationals who have reached Ukraine-Romania border by road will be taken by Indian government officials to Bucharest so that they can be brought home through Air India flights. Air India will operate more flights on Saturday to Bucharest and Hungarian capital Budapest to bring home Indian nationals stranded in Ukraine.

The Indian Embassy in Kiev, Ukraine has issued another advisory for Indian citizens. In this, Indian citizens trying to exit Ukraine have been asked not to go to any border post without prior coordination with the officials of the Government of India.

#UkraineRussiaCrisis All Indian citizens are advised not to move to any of the border posts without prior coordination with GoI officials at border posts: Embassy of India in Kyiv, Ukraine in an advisory to Indian nationals pic.twitter.com/K2Yeu2YxwP

What happened in the censure motion against Russia in the United Nations?

Russia has vetoed a UN Security Council resolution calling on Moscow to halt its invasion of Ukraine and withdraw all troops. On Friday, 11 votes were cast in favor of this resolution and one vote in the opposition of the United Nations Security Council. China, India and the United Arab Emirates abstained from voting. A total of 11 countries voted in favor of the resolution, including Albania, Brazil, France, Gabon, Ghana, Ireland, Kenya, Mexico, Norway, the UK and the US. The resolution could not be passed in the Security Council because it was vetoed by Russia, a permanent member of the Council.

Guatemala withdraws its ambassador from Russia

The Central American country of Guatemala has opposed Russia over the war in Ukraine. With this, he has also called back his ambassador posted in Russia. Guatemalan President Alejandro Giammattei said his country strongly condemned Russia’s actions and stood with countries supporting Ukraine.

Condemnation motion presented against Russia in UNSC, India and China stayed away from voting

In the United Nations Security Council, India and China did not participate in the vote on the motion of condemnation against Russia. The draft resolution condemned Russia’s attack on Ukraine. In this, Russia has been asked to leave Ukraine unconditionally, immediately and completely. India did not take part in the vote on this resolution, but issued a statement expressing regret over the ongoing violence in Ukraine, calling for it to stop. Read here what India said about the war…

Russia-Ukraine War LIVE: Ukraine will get 2600 crore military aid from America amid the war with Russia, Zelensky turns down the offer to leave the country

Ukraine’s President Zelensky said tonight will be tougher than the rest of the day. Many cities of our country are under attack. Shernihiv, Sumy, Kharkiv, Donbass, also cities located in the south of the country. But we cannot lose our capital Kiev.