School shooting in USA: 21 killed including 18 children, 18-year-old student was also killed; Biden calls it a “genocide” – USA: 21 people died in firing by 18 year old student and joe biden calls it a Massacre

by Sandhya Hirani
in Latest News, World
Reading Time: 2 mins read
0
A A 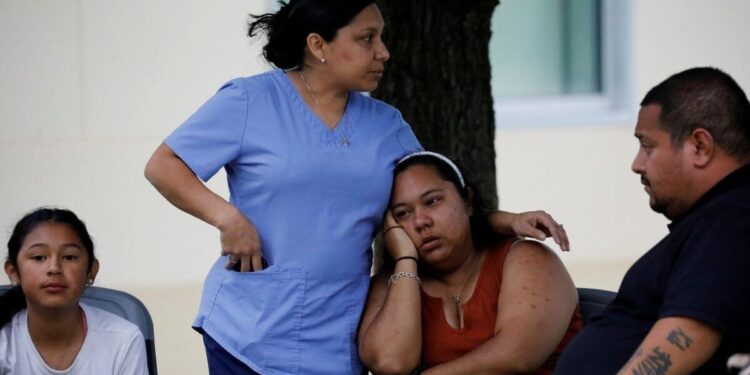 An 18-year-old boy opened fire indiscriminately at a primary school in the US state of Texas. 21 people, including 18 children, were killed in this attack, while many more were injured. By the way, during the retaliation of the police, later the attacker was also killed. Gunshots were heard at Rob Elementary School in Uvalde, Texas, 134 km from San Antonio, at around 11:30 a.m. Tuesday.

US President Joe Biden called it a genocide. He also raised the question that when will they stand against the gun lobby? A spokesman for the Texas Department of Public Safety confirmed to news channel CNN that 19 students and two adults were killed in an attack at Texas Elementary School.

According to officials, the boy who opened fire at Robb Elementary School was a high school student in a nearby school. He too was killed on the spot. Governor Greg Abbott told a news conference, “He shot to death horrifyingly, which is incomprehensible.”

Biden said, “As a country we have to ask, in the name of God, when will we stand up against the gun lobby and what do we need to do? These parents will never be able to see their children again.”

At the same time, US Vice President Kamala Harris said during an event in Washington – Enough is enough. We as a country have to show courage to take action now.

The latest incident of such shooting outside the school in America again started the political debate on gun law and weapons prevention.

10 days earlier, an assailant shot and killed 10 people at a grocery store in Buffalo, New York.

Local Ray Chapa told reporters, “It’s really savagery.” According to him, the nephew was in school when the shooting took place. However, the good news was that he was safe.

Meanwhile, the school’s fourth grade girl was missing, whose father, Ryan Ramirez, told KSAT in San Antonio that his daughter’s whereabouts were not known.