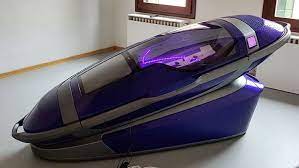 Switzerland, one of the most modern countries in the world, has allowed the use of suicide pods in the country. Named ‘Sarco Capsules’, this 3D printed capsule has been made by an Australia-based company. The machine can be started by a man sitting inside and can be easily moved from one place to another.
According to a report by Swissinfo, the pod made in the shape of a coffin is quite comfortable. All the credit for making the pod goes to Dr. Philip. Who is the founder of the Australian company Exit International. Doctor Philip told that after going inside, some questions would be asked, after which he would be given some time to press the button. Let me tell you that it may sound strange to you, but in Switzerland it is legal to assist in suicide. About 1300 people have similarly injected sodium pentobarbutal and went into deep coma, after which they died.
Once the button is pressed, the capsule will fill with nitrogen which will reduce the oxygen level by 1% to 21% in about 30 seconds. “The person will feel a bit disoriented and may feel a little euphoria before losing consciousness,” Nitske explained in an interview with Swissinfo. He said that after losing consciousness, there will be death after 5-10 minutes. According to Nitschke, during the entire process, the person inside will not feel any panic or suffocation.

Madhya Pradesh: Even after getting engaged, the young man used to talk with his girlfriend, the father, along with his daughter and wife, put him to death

Delhi: Police caught snatching people on the streets with stolen bikes, have done more than a hundred cases

T20 World Cup: The race for India’s place in the group became interesting, the competition between Scotland, Bangladesh and Oman