by AnyTV
in Latest News, Sports
Reading Time: 3 mins read
0
A A 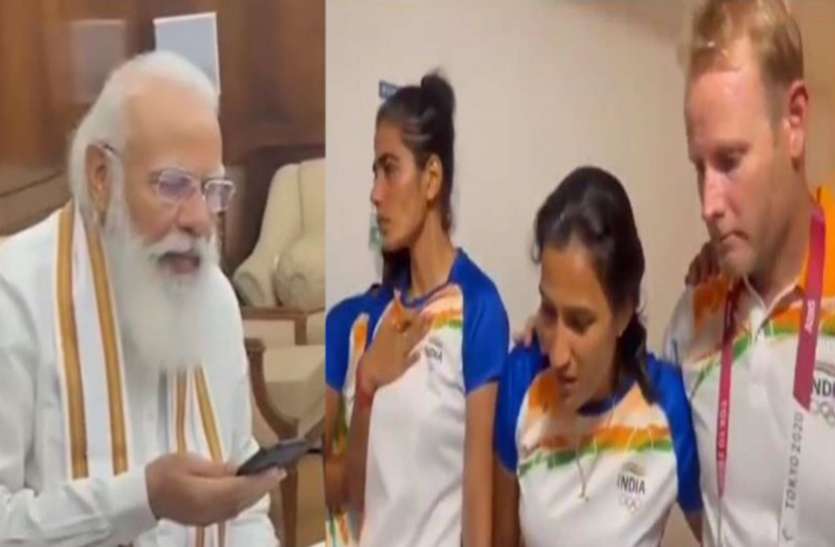 In such a situation, Prime Minister Modi called the women’s hockey team after losing the match and consoled them. The players started crying bitterly as soon as PM Modi called. During this, the PM encouraged the players of the team and said that the country is proud of you. Let us tell you that the Indian team reached the Olympic semi-finals for the first time, but lost to Britain 3-4 and missed out on the bronze.

Let us tell you that talking with the Indian women’s hockey team for 2 minutes 48 seconds gave them courage.

Prime Minister: Greetings to all of you

Prime Minister: Look you guys have played very well. You sweated so much, sweated so much. Leaving everything aside, you were doing sadhna. Your sweat couldn’t bring a medal. But your sweat became the inspiration of crores of daughters. Congratulations to all your teammates and your coach. Don’t be disappointed at all. Well I was seeing that Navneet has got some injury on his eye.

Women’s Hockey Player: Yes, she got hurt yesterday. He has got four stitches.

Prime Minister: You have not faced any problem. Bandana you all did a great job. Salima has done wonders.

Women Hockey Player: Thank you so much sir

PM: First of all you all stop crying! Even the sound is coming. Look, you all do not have to be disappointed. The nation is proud of you today. Don’t be disappointed at all. India is the identity of hockey. Hockey is getting revived in India after so many decades and it is happening because of your hard work.

The exceptional performance of the Men’s and Women’s Hockey Team has captured the imagination of our entire nation. There is a renewed interest towards Hockey that is emerging across the length and breadth of India. This is a very positive sign for the coming times. pic.twitter.com/E7HT3Gd7h5

Indian Women’s Hockey team excelled on the field and won the hearts of every Indian with their stellar performance. We are proud of you all.