#VisionaryYogi became one of the top trends of Twitter, people praised the efforts of CM Yogi Lucknow. Uttar Pradesh Chief Minister Yogi Adityanath while launching the logo, tagline and portal at the curtain raiser ceremony of Uttar Pradesh Global Investors Summit 2023 at Sushma Swaraj Bhavan in New Delhi on Tuesday. Then the hashtag Visionary Yogi (#VisionaryYogi) was trending on top on the social media site Twitter. Till 1 pm, more than 18 thousand people tweeted through this hashtag on Twitter. Using #VisionaryYogi, Twitter users praised the vision of Chief Minister Yogi, under which the Global Investors Summit is being organized to make Uttar Pradesh a one trillion economy.

Large scale reforms have been done to attract foreign investors to invest in Uttar Pradesh. According to the investors, 25 policies of different sectors have been modified or a new policy has been issued. A portal has been launched to facilitate investment. 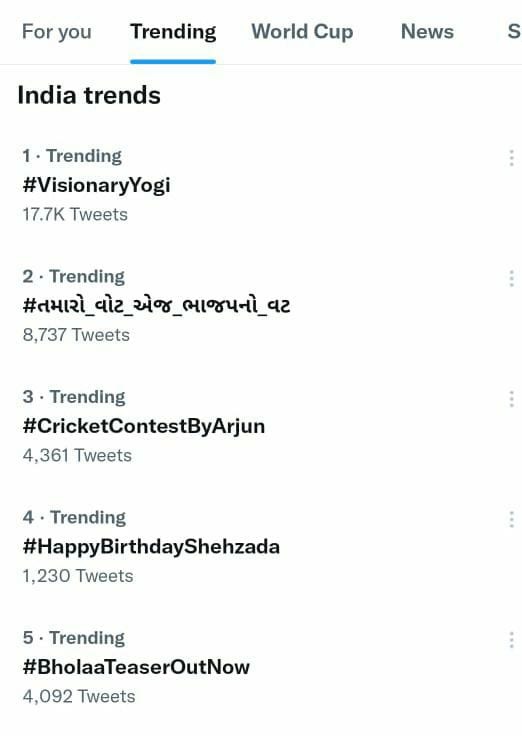 Puneet Agarwal tweeted with #VisionaryYogi, Global Investors Summit will be historic. This will be the realization of the dream of New India and New Uttar Pradesh. On the other hand, Dr. Shobha wrote, according to the intention of the Chief Minister, the Global Investors Summit will showcase the suitable environment for investment in Uttar Pradesh and attract investors not only from the country, but from all over the world.

The Global Investors Summit-2023 will be unprecedented and historic, giving flight to the aspirations of the people of ‘New India, New Uttar Pradesh’.#VisionaryYogi pic.twitter.com/jzf21VRj8D

A user named Arjun wrote that this is Yogi ji’s UP, changing UP. Dr. Prachi Sadhvi wrote, Uttar Pradesh became Uttam Pradesh under the leadership of Yogiji Maharaj.

Hariram wrote, Yogi ji has only one objective and that is to make UP the best state in the country. I am very happy with his vision. Akhil Chauhan wrote, Uttar Pradesh is moving towards development under the leadership of Yogi ji, this is a hashtag recognizing the aspirations of the new Uttar Pradesh.