by Rajeev Bansal
in Latest News, Technology
Reading Time: 2 mins read
0
A A 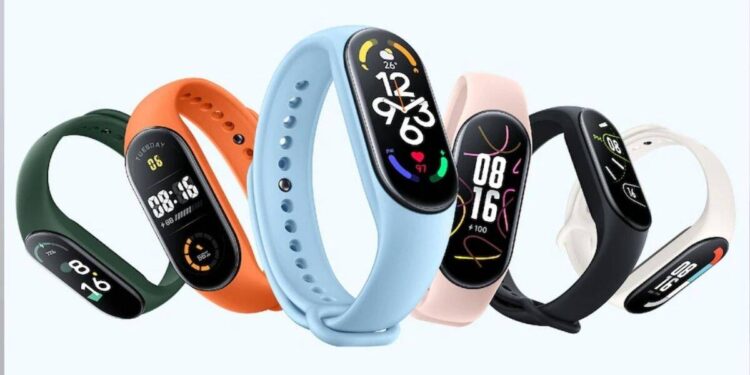 Xiaomi has launched the latest fitness bands Mi Band 7 and Mi Band 7 NFC in its Mi Band series. The company took the wraps off the Mi Band 7 and Redmi Buds 4 and Redmi Buds 4 Pro TWS earbuds at the event along with the Redmi Note 11T Pro+ series. Mi Band is included in the company’s popular device. It has been launched with better design, bigger display and some new features. Let us tell you everything about the price, specifications and features of Xiaomi Mi Band 7.

Xiaomi Mi Band 7 Specifications
Mi Band 7 has a 1.62-inch AMOLED display, which is bigger than the 1.56-inch given in the previous Band 6. The company has increased the display size by about 25 percent. By doing this the user experience will be better. Let us know that Mi Band 7 comes with Always-on-Display feature. If you look at the user interface of Mi Band 7, you will see new icons, animations and visuals.

Talking about the health and fitness features given in Mi Band 7, it has a 24/7 heart rate monitor. Apart from this, there is a SpO2 monitor to measure the blood-oxygen level. This band also has a sleep tracking feature that gives complete information about deep and light sleep. More than 120 sports modes including walking, running, cycling have been given in the new Mi Band 7.

Talking about the battery life, Xiaomi claims that the Mi Band 7 battery will last up to 14 days on a single full charge. The company has given 180mAh battery in this band. Apart from this, this band is water resistance and comes with 5ATM water resistance rating. Smart notifications and multiple color options are available in this smart band.