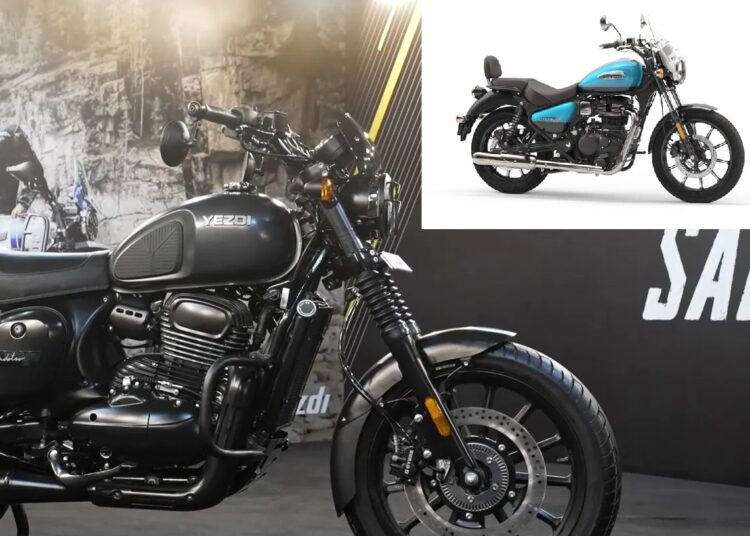 The Yezdi is back in India thanks to Mahindra-owned Classic Legends. The company has recently launched not one but three motorcycles. The special thing is that this will be the first time that both Jawa and Yezdi brand names will be available for sale at the same time. The Yezdi brand has entered the Indian motorcycle market with three different motorcycles – Adventure, Scrambler and Roadster. Each of which is tailored for their respective segment.

The Yezzi Roadster launched by the company is a sporty cruiser, and we are confident that it will attract the most buyers due to its aggressive appeal. As of now, we have compared the Yezdi Roadster with its biggest rival in the Indian market, the Royal Enfield Meteor 350. Which bike fits in your budget.

What’s special about the design?

Talking about the design, telescopic suspension at the front of Yezdi Cruiser and dual shockers at the rear have been given. Its instrument cluster houses an LCD instrument console. On the other hand, a second digital screen has been given in the bike, which may be available as an accessory in the future. Apart from this, the motorcycle also gets an LED headlamp, an LED taillamp, disc brakes on both the wheels, dual-channel ABS, and alloy wheels (18-inch front and 17-inch rear).

The RE Meteor 350, on the other hand, has a sleek design, offering a semi-digital console with tripper navigation as standard. On the other hand, it gets halogen headlamps with an LED DRL ring, an LED taillight, disc brakes on both the wheels, dual-channel ABS, and alloy wheels (19-inch front and 17-inch rear). Along with this, the stellar variant of the RE Meteor 350 gets a pillar backrest and chrome finish for the exhaust, while the Supernova variant gets a longer windscreen and machine-cut alloy wheels.

The Yezdi Roadster is the more powerful of the two bikes, with its 334cc liquid-cooled engine producing more power and torque than the Meteor 350’s 349cc air/oil-cooled motor. Along with this, the Yezdi gets a 6-speed transmission, while the Royal Enfield comes with a 5-speed gearbox.

Also read: The wait will be over for Honda Activa 7G, the company is preparing for launch in India with a mileage of 55kmpl

Hospital cannot refuse patients with cashless mediclaim for the treatment of corona, know this important thing

Children should not get addicted to social media, for this, parents must do this work