by Kavita Nagar
in Lifestyle
Reading Time: 4 mins read
0 0
A A 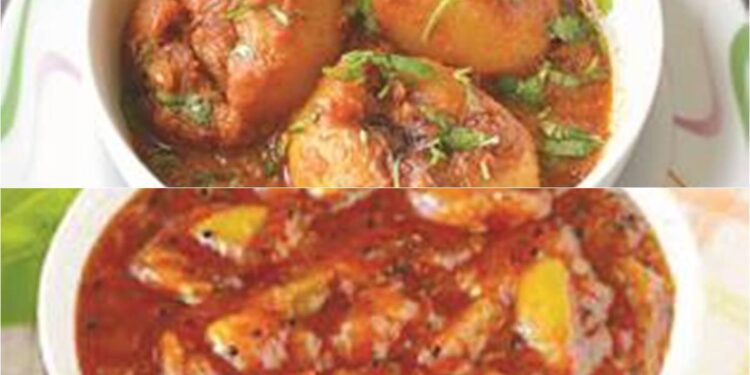 Curd stuffed tinde
Tinda is also one of the vegetables available in this season. But children start shrinking their nose and eyebrows as soon as they hear the name of Tinde. However, if tinde is made properly, then their taste is very interesting. Tinda is also a vegetable of the gourd species. Many people make it dry vegetable, like bhujia. Some people make it juicy, some make stuffing.

The joy of stuffed tinde is different. But usually while making stuffed tinda, people cut it into four halves and fill it with onion-tomato masala and then put a lid in the pan and let it sink. Some people hollow it out and fill it with stuffing and then bake it in the same way as they bake stuffed bitter gourd. But make the tinde stuffed and spicy, then its taste comes out differently. Make Tinda ki Tari in curd, then the taste gets enhanced. Like we talked about earlier on the method of making Yakhni Gourd, similarly we also make Tari of Stuffed Tinde.

To make stuffed tinde, take fresh and soft tinde. The easiest way to identify a good locust is that the locust whose rind has light feathers on it is soft and seedless. Similarly, take eight to ten medium sized tindas or as many as you need. Wash and wipe them clean. There is no need to peel them off. Slightly cut off the top and carefully remove the inner pulp from them and hollow them out. Keep the pulp aside, it will be useful for stuffing.

Now prepare its filling. One to two boiled potatoes, about 150 grams of paneer, green coriander, green chilies and ginger will be needed for the filling. Heat a spoonful of oil in a pan. Add the tempering of cumin and fennel to it. Then sprinkle the tinda pulp in it and cook on low flame till it becomes soft. Add half a teaspoon salt, quarter teaspoon crushed red chili, a little less than quarter teaspoon garam masala, a pinch of turmeric powder and mix well.

Now add grated potatoes and paneer to it and cook for three to four minutes while stirring well, so that the moisture of the vegetables dries up completely. Turn off the flame. When the stuffing cools down a bit, then add chopped coriander, ginger and green chillies and mix them and make small balls and fill them in the balls.

Heat two to three spoons of oil in a pan and carefully place the tinde in it. Make sure that the filled side of the tinde is facing up. Make the flame medium. Put the lid on the pan and let it cook for about ten minutes.

Now prepare its recipe. Take one to one and a half bowl of curd. Beat it well. Add a pinch of turmeric powder, half a teaspoon of salt, a quarter teaspoon of crushed red chili, a teaspoon of coriander powder and two teaspoons of fennel powder and mix it well and keep it for five to seven minutes, so that the spices dissolve well in the curd. Let’s meet In this way, the possibility of curd bursting while cooking will also be eliminated.

Now heat a spoonful of oil in a wok or pan. Add a pinch of cumin seeds to it. When the tempering is ready, turn off the flame and add the curd mixture. Keep the flame off for two to three minutes and then turn on the gas. Cook for five minutes while stirring. When the curry starts to boil, add 1/4 teaspoon degi chili or Kashmiri chili powder and turn off the flame after it comes to a boil. Tari is ready. By now even the tinde would have synced. Take them out in a separate bowl and then pour curd curd over them so that all the tindas are soaked well. Now garnish with coriander leaves and serve.

Mango licorice
This is the most suitable season for making raw mango dishes. Raw mangoes are available in abundance in this season and many types of dishes are prepared from them. Launji is the most popular of those dishes. The sour, sweet, pungent, mildly salty taste of launji goes well with every type of food, hence it is loved by all.

Launji is very easy to make. For this neither separate preparation is required nor separate material is required to be collected. It is actually a type of sweet chutney, but due to being juicy, it can be eaten in place of vegetables at times. With paratha or roti. To make launji, peel three to four raw mangoes and cut its pulp into thin slices.

Then heat a spoonful of ghee in a pan and add whole coriander, cumin, fennel, 2-3 whole red chilies and carom seeds to it. When the tempering is ready, sprinkle the mango and let it cook covered on low flame for five minutes. Now add a little salt to it and cook the mango till it becomes a little soft. Then add quarter teaspoon crushed red chili and stir it. Now add five-six spoons of sugar to it and add a cup of water and stir it. Put a lid on the pan and cook the launji till it becomes slightly thick. Launji is ready.

Also Read  Make oil from bay leaves, know the benefits and how to apply

Teeth Care: If you are troubled by yellowing of teeth, then leave these 7 things today

Teeth Care: If you are troubled by yellowing of teeth, then leave these 7 things today