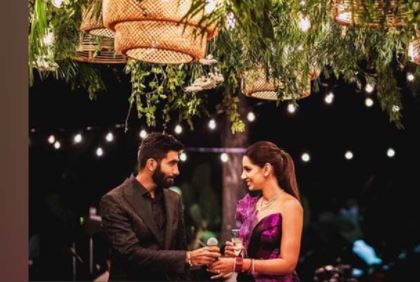 Wrote – We are grateful for your well wishes!

Indian cricketer Jasprit Bumrah has shared two photos of the reception with his wife Sanjana Ganesan on social media and has also written an emotional post. He has written that the magic of the past several days is no less. I am grateful for the infinite love you have received from me. Thank you.

On the other hand, Sanjana Ganesan also shared the photo of the reception and wrote that we are grateful for the love you have been getting from you people for many days. With a big smile you are reading people’s messages and wishes.
ALSO READ  People recovering from corona should stay away from the pollution of firecrackers, experts warn

Followed the guidelines of Corona

In the function of Bumrah and Sanjana’s wedding, the guidelines of Corona were followed. Only a few guests were invited during the wedding reception. 28 years old Sanjana Ganesan is a cricket anchor. For many years she has been involved in many tournaments. Apart from being active in IPL, she is also associated with sports. Sanjana has been anchoring from the ICC World Cup 2019 to the Indian Premier League. Apart from this, Sanjana is also the anchor of Kolkata Knight Riders. Sanjana has won the Femina Gorgeous title in 2013.

ALSO READ  Are you also a foodie, so don't forget to test these plates; Get rewarded for finishing

Let us tell you that during the Test match being played between India and England, Bumrah withdrew his name. He had sought leave from BCCI for personal reasons which was accepted. When Bumrah’s name came up during the team announcement, everyone knew that he would not be a part of the game any further.