Havildar was caught in a video stealing eggs from a roadside street vendor, suspended 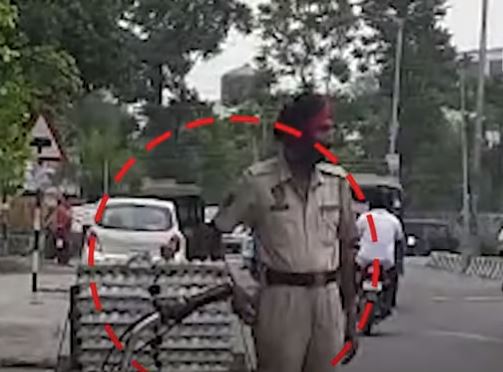 In the present age of internet and smartphones, nothing remains hidden. It is difficult to say who, when, at which point your camera captures your antics. Therefore, before doing any illegal act, think a hundred times, think what – stay away from any such act. A small mistake can cause you a big loss.

Yes, a Havildar of Punjab has made a small mistake and has to come to his job. The development is such that it is of Jyoti Swaroop Marg of Fatehgarh Sahib in Punjab. Here on the side of the road an egg seller’s street vendor was standing. The street vendor had probably gone somewhere. Halvdar Pritpal Singh was standing nearby. Perhaps seeing the eggs made his mouth water. He secretly slid four eggs one after the other into his pocket, thinking that no one was watching. Then sit in the auto and walk from there. But he did not know that a person nearby was capturing the whole incident in his camera.

After the constable left, when the street vendor came and found four eggs less. The man who recorded the video told him the whole story. This video is becoming very viral on social media. According to Jagran’s report, when DGP Dinkar Gupta got the news, he took the matter seriously and ordered a departmental inquiry against the constable. He was suspended with immediate effect. The investigation has been entrusted to DSP Prithi Singh Chahal. District Police Chief Amneet Kaundal has told the media that such actions in the police department will not be tolerated at any cost. Indeed, the sergeant’s small mistake has cost him dearly.