Social media: This young man showed bravery, saved the dog who fell 15 feet in the drain 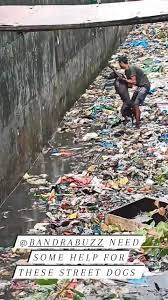 Everyone is praising Ramadan after the video surfaced

Every day something goes viral on social media. Some of them are funny and funny and some are sad! After watching the Luch video, we are shocked and forced to think. Recently one such video is going viral on social media. By watching this video it can be understood that but there is no religion greater than interest. This video shows that the one who has compassion and courage for every living being, he does not shy away from helping any voiceless.

Let us tell you that due to the rains in different parts of the country, many places have been flooded. In many low-lying areas, the situation has worsened. The situation in Mumbai is no exception to this. In Mumbai too, places have been flooded and from traffic to life, life has been badly affected. Along with humans, other animals are also troubled by this problem. In such a situation, a dog got stuck in a drain in Rahul Nagar, Mumbai. Everyone was upset seeing this animal trapped down about 15 feet, but no one had the courage to get down and save it.

Also Read  Had we known that Muslims would be suppressed in India, our decision would have been different: Omar Abdullah

When all others stood & watched, this 27-year-old #Bandra Reclamation resident (Ramzan Shaikh) hastened to rescue a stray dog ​​which fell into a 15-feet nullah at Rahul Nagar. pic.twitter.com/Agtc7VmuJU

People were standing and watching, when a 27 year old boy comes and jumps into the drain. He took the dog out safely by jumping into the drain. The name of this boy is being told as Ramzan Shaikh. After this video surfaced, people are praising Ramzan fiercely.