This man cuts watermelon into pieces with just one finger, the video is going viral 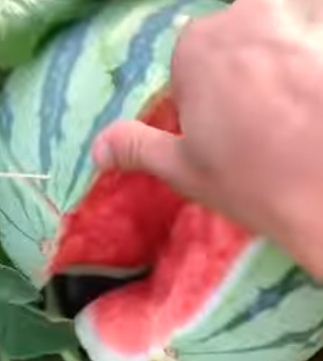 Many videos go viral on social media from time to time. Some of which are also such, which are quite funny and can make you laugh and make you laugh. So by watching many videos there, you may also be surprised. One such shocking video is going viral on social media recently. In which a person is seen breaking a watermelon. You will also be shocked to see the way the person is plucking the watermelon.

In the viral video, it can be seen that the person first inserts a toothpick into the watermelon and then cuts it into pieces with the help of a finger. After watching this video you will definitely be surprised that how one can break a watermelon with one finger. This video has been shared on Instagram with the name “yournaturegram”. More than 13 lakh people have liked this video so far.

Users are sharing this video going viral on social media and different types of comments are being made on it. In which one user wrote, I tried, but my finger broke. At the same time, other users wrote that, if you break a watermelon like this, then your hand will break, so do not try. At the same time, other users are also seen giving funny reactions.

RSS leaders were on the target of PFI, had made a complete plan to kill, the investigation agency disclosed