Uncle’s ‘fan hi-tech’ cycle has gone viral on social media, did you see 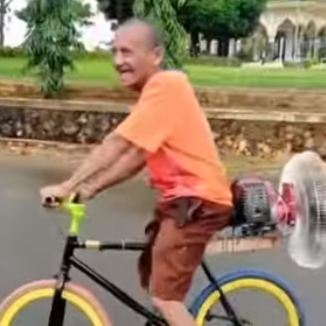 As can be seen in this video going viral, how a uncle is busy making his bicycle hi-tech. He is working very hard for this. In this hi-tech cycle made by Kaka, Kaka has fitted the fan on the wheel with the jugaad. Bicycles made from this jugaad are quite popular. Uncle, this jugaad is making a lot of noise on the internet these days.

Let us tell you, this video has been shared by users named ‘abhitakbanjara’ on social media platform Instagram. Users are sharing this video (viral video) and giving different types of reactions on it. One user wrote that, I am stunned to see this hi-tech cycle. On the other hand, other users wrote that Kaka has really done wonders. Apart from this, all other users are seen praising Kaka.