When the monkey hoisted the flag by climbing on the roof of the school, the video is going viral on social media 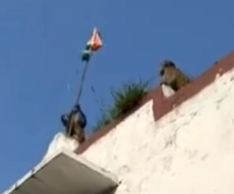 A few days back India’s Independence Day has been celebrated. On this day everyone hoisted the flag in their school, office or their society. You all know about the flag hoisting done by humans. But have you ever seen a monkey hoisting the flag? A video is becoming quite viral on social media these days, in which a monkey climbed the roof of the school and hoisted the flag. Seeing this video shot in school, no one can believe that this monkey has done it all by himself.

It can be seen in the video that two monkeys climbing on the roof were trying to wave a flag. But when the flag did not open at once, he went a little higher and started hoisting the flag. When still the flag does not open, the monkey climbs up a little more and hoists the flag, then the flag opens and flowers start raining from it. As soon as it starts raining flowers, the monkey also comes to know that he has hoisted the flag in the right way.

This video viral on social media is being liked by the people. Many people are making funny comments on this. A user had hoisted the flag in a perfect way like this monkey. Due to which many people talked about learning humans from that monkey. This video has been shared on a page of Instagram, which has received more than four and a half thousand likes so far.