When the new bride danced fiercely with Nandan, the video went viral on social media 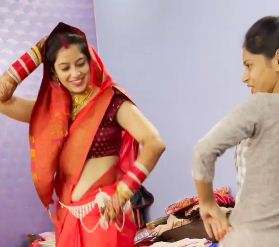 In a country like India, where even today, old-fashioned civilization and customs are going on in many villages. In such a situation, the bride who came to her new in-laws’ house after getting married remains shy with people for a long time. In the initial days, the bride hesitates in many matters. But in today’s era people are breaking old traditions.