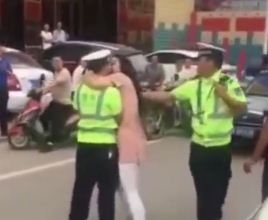 The video shared on Instagram is getting many funny comments

Many types of videos keep going viral on social media. One such video is becoming quite viral these days. In which the woman started kissing forcibly after a policeman refused to accept the bribe. As soon as the video of the woman kissing the police in this way became viral on social media, people started chatting on it.

It can be seen in the video that when the police tried to take the woman into custody for some crime, she made several attempts to free herself. The woman also offered bribe to the police. But when the policeman still did not agree, the woman started kissing him forcibly. After watching the video, people have made many funny comments. One user even said that now he too wants to go to the traffic police after growing up, he will be very happy like this. Although many users wrote that it is not funny at all. If a boy had done the same thing, people would have called it a rap.