‘I am eating a paratha, have half left, will definitely come’ the cab driver gave a funny reply 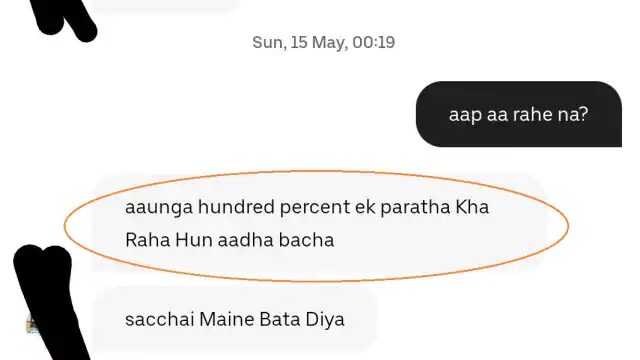 Many times it happens when the drivers of cab vehicles are in the headlines due to their quirky style. Sometimes their customers are fun too. Recently, the honesty of an Uber driver has been winning the hearts of people on social media. What happened is that this driver wrote such a message to his customer that people got dumped. This screenshot of the driver is going viral.

Actually, the Uber driver has sent this message to one of his customer passengers. According to a report by NDTV, when the customer messaged and asked if you are coming, the driver replied in a funny way, ‘Aaunga hundred percent, I am eating only one paratha, half left… I have told you the truth. ‘ After this the conversation ends.

This screenshot has been shared on Twitter by a user named Karishma Mehrotra. She wrote a funny caption and posted that I look forward to achieving such honesty in life. It went viral as soon as the user shared it. When a user asked if he came later, it was replied that yes absolutely came.

Not only this, many other users also started taking chatter on this post. A user named Kshitij wrote that such a person can write such a thing only when there is no fear of anything in life. Another user wrote that this is such a funny reply that anyone can laugh at it.