Iran: A male doctor applied the vaccine to his wife, then the man slapped the governor

by AnyTV
in Viral News
Reading Time: 2 mins read
0
A A 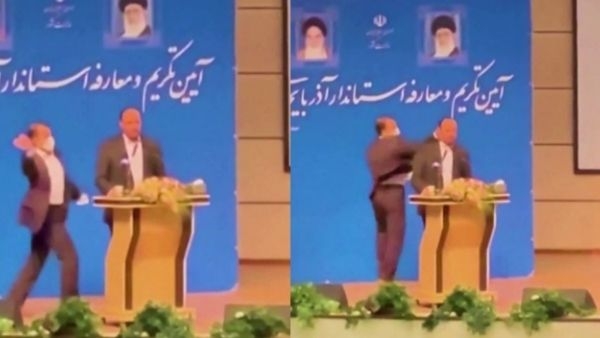 Can you believe that a man slaps the governor of his city just because his wife was vaccinated by a male doctor? This has really happened. In fact, in Iran, a man slapped the governor of the province very sharply and furiously during an event. This slap was so fast that all the people present in the program were stunned. When the accused man was caught by the guards present there, it was found that the accused man was angry with the governor only because his wife was administered the Kovid-19 vaccine by a male doctor. The attacker was caught and arrested.

Abedin Khorram, the new governor of #Iran‘s East Azerbaijan Province, was slapped by an audience member during his inauguration ceremony. Khorram told the media that the assailant is an IRGC member & has slapped him because his wife’s #COVIDVaccination was performed by a man. pic.twitter.com/uSALi6SBCf

According to the information, the name of the slapped governor is Abedin Khorram, who is posted as governor in north-west Iran, near the border of Azerbaijan. Khorram is a former provincial commander and was one of 48 Iranians taken hostage in Syria in 2013, who were later released in exchange for some 2,130 rebels. When he came on stage for the inaugural speech and started addressing the people present, then all this matter happened at the same time.
Let us tell you that the accused person had slapped the governor so fiercely that the sound of the slap was also captured in the mike and started resonating in the room. However, even after being slapped, Governor Khurram resumed his speech and then started telling the story of his kidnapping in Syria to the people. The biggest thing is that even after such a big incident, Governor Khorram has forgiven the person who slapped him. According to the state police, the accused man is a guard of a security agency.

Tsunami warning issued. Alert in the area of ​​300 km. 7.9 earthquake shook the earth