Pakistani star shot the video ‘by setting fire to the forest’, people were furious 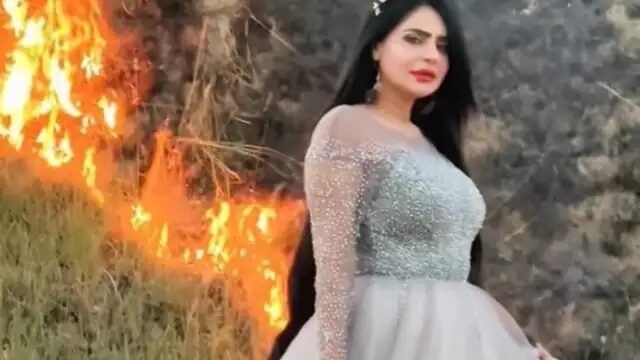 There is a fierce fire these days in the forests of Abbottabad, Pakistan. This forest fire is due to the tremendous heat falling there and due to the heatwave. Meanwhile, a video from the middle of the fire has gone viral on social media, seeing which people are furious. All this has happened when a social media star from Pakistan has shot her video there.

Actually, Pakistan’s social media star Humaira Asghar posted a video amidst burning forests. In the caption of this video, she wrote that wherever I go, there is a fire. Humaira made this video in a forest surrounded by fire. It is seen in the video that Humaira Asghar is wearing a gown and she is walking wearing it and a large part of a forest is on fire behind her.

As soon as this video went viral, people got furious on social media. Not only this, some users also alleged that Humaira Asghar has set this fire to shoot his video. Seeing the growing controversy, Humaira’s team clarified. A statement from his side said that he did not start this fire. There is no harm done in making this video.

Although even after this people did not agree, Humira deleted the video, but still this video and its screenshots are going viral on social media. People on social media called it a crime and demanded from the police that they should be arrested at the earliest. Let us inform that due to the scorching heat in Pakistan, the temperature of some areas has reached 51 degrees. Due to this there is a huge fire in the forests of Abbottabad.

IND W vs ENG W U-19: India hoisted the flag in the Women’s Under-19 T20 World Cup, defeated England by seven wickets in the final

This big discount offer on Flipkart, buy a smartphone worth Rs 20,000 at a nominal price, know the details

Maruti Suzuki called back more than 9 thousand cars, if your car is not there, know what is the reason