The dead frog found in this restaurant’s famous chicken burger, the eater’s senses were blown away 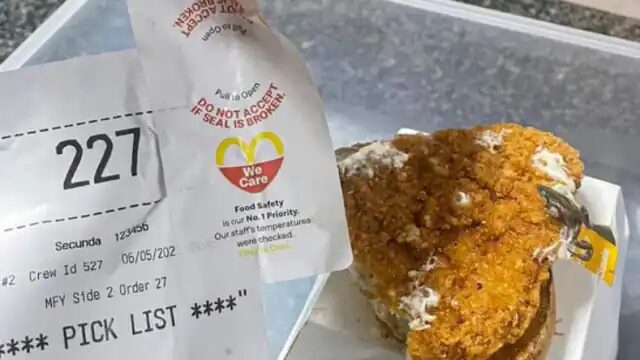 Many people are fond of eating burgers and like to eat so much that they may or may not get anything but they definitely get burger at one time. In such a situation, if you are also fond of eating burgers, then this news is very important for you. A man took a chicken burger for his daughter from a famous restaurant. The daughter had eaten a bite that she saw something strange sticking on top of the burger tikki. When he looked closely, his senses were blown away, there was nothing but a dead frog stuck on the burger. The girl’s father not only complained in the restaurant, but also shared the incident on his Facebook, after which it became viral.

This case pertains to a branch of the famous McDonald’s located in South Africa. A man claims that he ordered a chicken burger for his daughter, inside which a dead frog was found. Her daughter was terrified on seeing the frog. The more worrying thing was that by that time she had taken a bite in the burger, after which she saw the frog and stopped eating the burger there. After which his father also took a photo showing the frog sticking in Bill Samet Burger, which later shared on Facebook.

The matter went viral on social media. After which McDonald’s has also said to set up an inquiry in this matter. On social media, the person has written that never thought that this could happen in reality. Now only saw this in movies.