Video: Something happened during the wedding that the mare ran away with the groom 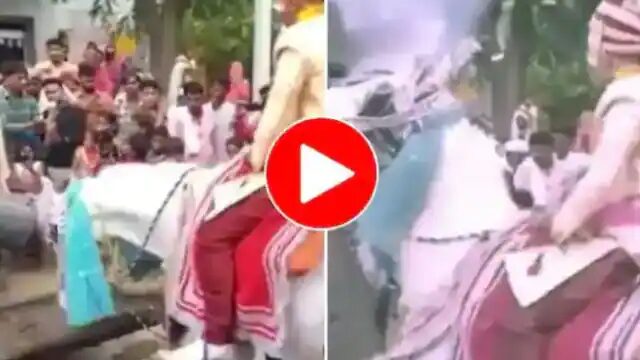 In Indian weddings, there is a practice of drumming and bursting of fireworks during Ghuchardi. But many times this trend becomes a source of trouble for the groom because the mare on which the groom is sitting goes away. This is because whether a horse or a mare, they go away with a loud sound. Once a horse has fallen, it is very difficult to control it. Something similar happened with a poor groom whom the mare ran away with. In fact, it happened that the groom was getting confused in a marriage. The bandwagon was playing when suddenly someone lit firecrackers. What was it then, hearing the sound of firecrackers, the mare broke down and she took away the groom. The mare ran with the groom sitting on the back of the mare. In front of the mare and back and forth the householder and the mare.

This video has been shared on Instagram page @ghantaa, which has been viewed by more than 40 lakh people so far. While a lot of likes and comments are coming on this video, on the other hand more than one comment is also coming. One user wrote – Knowledgeable people are telling that the mare is still running. At the same time, another user wrote that why people do not understand that animals do not like loud sound and run away from there when there is a loud sound.

It is worth noting that during the marriage of Ranbir Kapoor and Alia Bhatt in the past, there was no fuss. In fact, the Kapoor family had described the ritual of Ghudchadhi as cruelty on the mare. Pleased with this, an NGO named Animal Rahat named the two rescued horses after Ranbir and Alia.