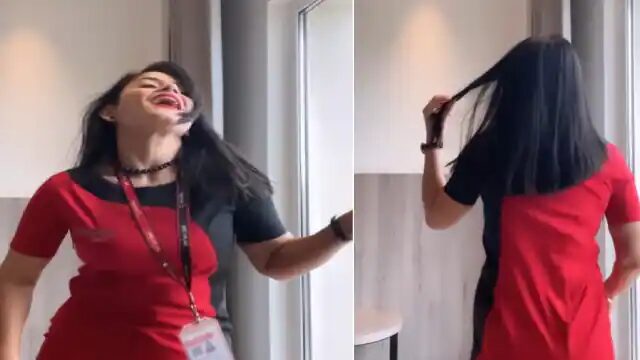 SpiceJet’s famous air hostess Uma Meenakshi often remains trending on the internet for her dance. Many dance videos of Uma have also become viral, due to which many of her fans have also become on social media. Uma keeps sharing some or the other video for those fans. Now a new video of Uma is going viral in which she is seen doing a scintillating dance on Saif Ali Khan and Jacqueline Fernandez’s song ‘Mujhe To Teri Lat Gayi’.

In the viral dance video, you can see that Uma Meenakshi is seen dancing to this song in a room. It is being told that this is a hotel room where Uma has shot the video. In the video, Uma is seen dancing amazingly on the song of Race 2. During this, he is wearing his air hostess uniform and at the same time his ID card is also hanging. Uma’s video has become fiercely viral as soon as it is shared, which is also being liked a lot.

This video has been shared on Instagram from the official account yamtha.uma. Millions of people have watched the video in a few hours. At the same time, about 10 thousand people have also liked the video. A large number of people are also praising this video by commenting. If you also want to see this wonderful bold dance video, then you can watch it by clicking on the Instagram link given below.

IND W vs ENG W U-19: India hoisted the flag in the Women’s Under-19 T20 World Cup, defeated England by seven wickets in the final

This big discount offer on Flipkart, buy a smartphone worth Rs 20,000 at a nominal price, know the details

Maruti Suzuki called back more than 9 thousand cars, if your car is not there, know what is the reason