by Sveta Goyal
in Viral News
Reading Time: 2 mins read
1
A A 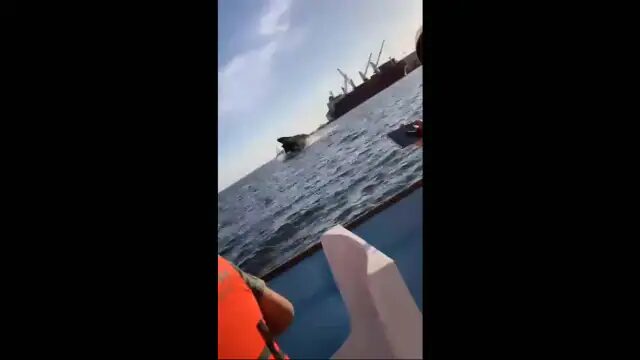 In a horrific incident, a giant humpback whale capsized and crushed a tourist boat in Mexico, injuring four passengers. The horrifying moment was caught on camera and shared on Twitter. In the video, a giant whale can be seen leaping out of the water and falling onto a boat in Ahom’s Topolobampo Bay in the Gulf of California. In the clip, a large whale can be seen leaping into the air and jumping onto the boat. However, instead of landing back in the water, the whale collided with the rear end of the small boat. As a result, the boat was close to capsizing but continued to float.

The officials blamed the boat operator for the incident as they had come too close to the animal. According to media outlets, the coordinator of civil defense in Ahom, Omar Mendoza Silva, believes the whales felt threatened by the ship’s proximity, despite the port authority’s orders to the boat captains to keep a sufficient distance from the whales. The pass was taken.

According to media reports, two men and two women aboard the tourist boat were injured and taken to the hospital. One woman broke her leg, while one of the men broke a rib and suffered a head injury. Brujita Marak, who posted the video, also shared a photo of the boat after the incident. It can be seen in the photo that the roof of the boat completely collapsed and the railing was broken.

It is being told that after the horrific incident, Ahom Mayor Gerardo Vargas said that tourists should not go too close to the whales. We can enjoy their beauty, but at a distance, judiciously. Let us tell you that the weight of a humpback whale can range from 55,000 pounds to 66,000 pounds. Topolobampo Bay is a popular place for whale watching and, especially at this time of year, Pacific gray humpback whales are in these waters to breed.