Viral Video: India does not want robots, these men have failed well in speed 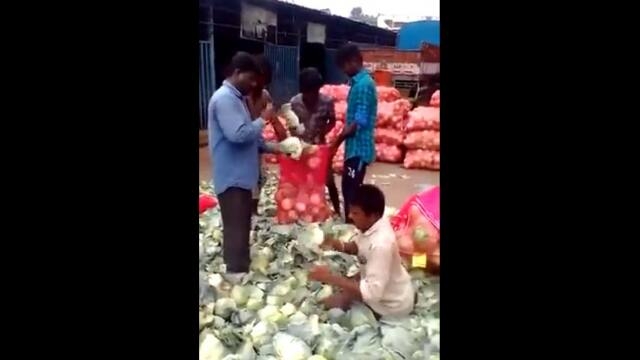 Even after the global shift towards automation, many tasks are still done manually. You must have seen that someone is completing his work with the accuracy and speed of the robot. Another such video is going viral on social media. This is a video of a vegetable market in which some people are working like machines. You will also be happy after watching the video and will say that’s why India does not need robots.

In the 53-second footage, workers can be seen hurriedly chopping and putting cabbage in a large bag. These four men can be seen packing the entire sack with cabbage in less than a minute in the video. It is being told that this video was shot in one of the wholesale vegetable markets. Eric Solheim, president of the Green Belt and Road Institute and former Norwegian diplomat, posted this video on Twitter with the caption that why India does not need robotic automation.

The video garnered over 1.6 million views and 100 thousand likes after being posted online. The comment section of the video received a lot of reactions. Many social media users lauded the speed at which people got to work, others suggested that implementing technology in India where there are more people would result in job losses.

One user wrote, India is a country full of talent. We only want a right leader who can lead the country to success through the middle class people and not through 5-10 billionaires.