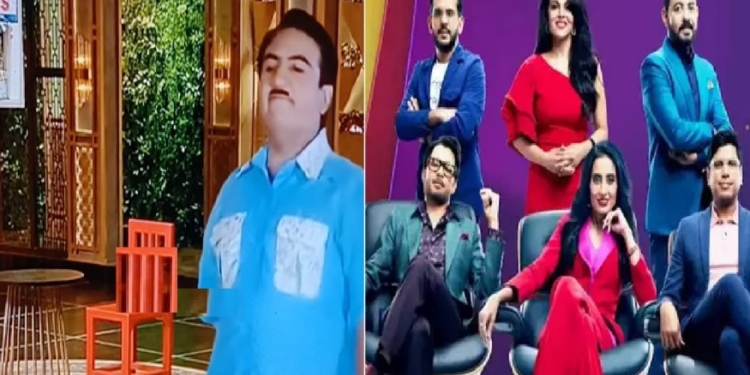 New Delhi. This season of Shark Tank India is very interesting, people are liking this season a lot. In this, entrepreneurs come from every corner of the country and put their business idea in front of the shark, after which if the shark likes their idea, they provide them with funds, sometimes the shark gets such ideas, due to which they interact with each other. They start fighting as to who will give their funds in this business. There are some entrepreneurs whose idea is not liked by the sharks but the audience is so happy with their idea that they start buying their brand. This is a matter of the show, but now a video of a shark tank is becoming quite viral on social media, which is being liked by the fans.

Actually, a video is becoming quite viral on social media, on which it is shown that Jetha Lal of Taarak Mehta Ka Ooltah Chashmah show has reached the stage of Shark Tank. Although, this video has been edited, it has been made as such a joke. This video was shared by a user named The Mimar, which the viewers are enjoying watching. It is shown in this video that Jetha Lal is coming to the shark tank wearing a blue color shirt, after which Namita Thapar says welcome to the shark tank, after which Jetha Lal says that I have a shop called Gada Electronic in which at least There will be goods worth 40-50 lakhs. This video will tickle you a lot. However, after watching the video it is clear that this video has been edited.

This video shows how Jethalal silences all the sharks, this video is a gift for Shark Tank fans and Taarak Mehta Ka Ooltah Chashmah viewers. Everyone is enjoying a lot by watching this video. The special thing is that Sharq Aman himself commented on this video, who is the CEO of the boat company.