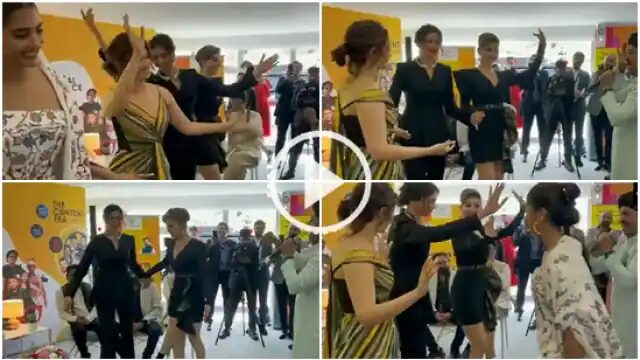 Deepika Padukone, Urvashi Rautela, Tamannaah Bhatia, Pooja Hegde Dances as Mame Khan sings at 75th Cannes Film Festival: The Cannes Film Festival is very special this time and many photos and videos of this festival are becoming viral on social media too. Information and Broadcasting Minister Anurag Thakur along with many Bollywood celebs also attended the inauguration of the India Pavilion at the 75th Cannes Film Festival. On the occasion of the inauguration of the India Pavilion, Rajasthan folk artist Mame Khan sang while ‘Ghoomar’ was sung by Deepika Padukone, Urvashi Rautela, Tamannaah Bhatia and Pooja. Hegde (Pooja Hegde) could not stop her steps.

Actresses dance on the tune of Mama Khan

News agency ANI has shared a video. This video is from the inauguration of the India Pavilion at the 75th Cannes Film Festival. In the video, Mame Khan is seen singing a folk song while Deepika Padukone, Urvashi Rautela, Tamannaah Bhatia and Pooja Hegde are seen dancing. This video is being liked a lot by social media users and in the comment section, along with the actresses, they are also seen praising Mama’s food.

What did Deepika Padukone say

Information and Broadcasting Minister Anurag Thakur, Actress Deepika Padukone, Tamannaah Bhatia, Actor R. Madhavan, Nawazuddin Siddiqui, film director Shekhar Kapur, music maestro A.R. Rahman and India’s Ambassador to France Jawed Ashraf attended an interactive session in Cannes. At the Cannes Film Festival, Deepika Padukone said, “I am feeling very proud… When I came into this industry 15 years ago no one believed in my talent or my art. It is my pleasure to experience the finest cinema in the world after 15 years as part of a jury panel, and I am thankful.

What did Nawazuddin and Shekhar Kapur say

On the other hand, Bollywood’s best actor Nawazuddin Siddiqui said, ‘There are many stories in our country which are local, but they can do a lot of work at the global level. We have a story everywhere. Such films are rarely encouraged. I hope Anurag Thakur ji will help in promoting such films. Film director Shekhar Kapur said, “India is a land of stories…we have to come forward with confidence that the world will accept us…more important than organizing Cannes is how we use the outcome after that.” ‘

What did Anurag Thakur say?

At the inauguration of the India Pavilion at the 75th Cannes Film Festival, Information and Broadcasting Minister Anurag Thakur said, “We have undertaken the world’s largest film conservation project under the National Film Heritage Mission. 2200 films in different languages ​​will be revived in this campaign I am pleased to announce today at Cannes an incentive scheme for audio-visual co-production and shooting of foreign films in India, with a limit of $260,000 Cash incentive up to 30% will be given. We will do whatever we can to make India the world’s content hub, the world’s destination for film production and post-production. I extend an open invitation to all to be a part of IFFI Goa 2022.