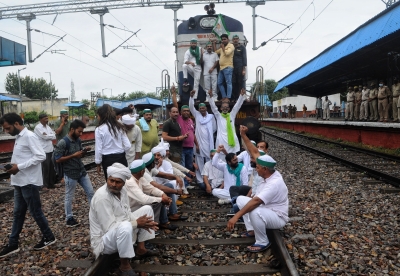 New Delhi, October 18 (IANS)| After the Lakhimpur Kheri violence case, the United Kisan Morcha called for a 6-hour rail roko movement on Monday, which had a mixed effect across the country. The SKM claimed that over 290 trains were reportedly affected and over 40 trains were cancelled. According to the information received from the Northern Railway, the places where rail services were affected, they have now started normally.
At present, the farmers are moving towards their respective destinations from the railway tracks. In fact, at hundreds of places across India, protesting farmers today agitated on railway tracks and platforms for six hours on the call of the United Kisan Morcha’s Rail Roko Andolan.According to SKM, over 290 trains were reportedly affected and over 40 trains were cancelled. Apart from this, the UP Police took the farmer leaders into custody at many places. In Madhya Pradesh, police arrested protesters at many places like Guna, Gwalior, Rewa, Bamnia (Jhabua) and other places. Protesters were also arrested in Telangana’s Kacheguda (Hyderabad).
It was informed by Kisan Morcha that reports of successful rail roko movement have been received from Punjab, Haryana, Uttar Pradesh, Bihar, Odisha, West Bengal, Rajasthan, Madhya Pradesh, Karnataka, Telangana etc.The United Kisan Morcha strongly reiterated its demand for the arrest of Ajay Mishra Teni from the Union Council of Ministers in the Lakhimpur Kheri farmer murder case.The SKM has also warned that the protests will intensify if the demand for justice in the Lakhimpur Kheri massacre is not met.

Agnipath Effect: 34 trains canceled amidst incidents of arson and vandalism in protest against Agnipath, 72 others also affected