‘Thank you’ to Anand Mahindra for shooting Ajay Devgn’s ad

by AnyTV
in Entertainment
Reading Time: 1 min read
2
A A 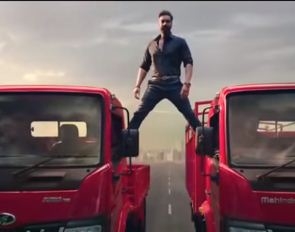 Mumbai, (IANS)| Bollywood star Ajay Devgn has recreated his iconic ‘Phool Aur Kaante’ split stunt for an advertisement using trucks. He thanked Anand Mahindra, Chairman, Mahindra Group and said that it was a great experience shooting the commercial. Anand Mahindra posted the ad campaign on his Twitter and wrote “30 years ago, in his first Bollywood film, Phool Aur Kaante, Ajay did his original master act. And now, he’s doing it again for Mahindra “

To which, Ajay replied, “Thank you Anand, my special feats will always be reserved for Mahindra. The shooting of this ad was great.” Ajay reprized his iconic ‘Phool Aur Kaante’ split stunt for the ad using trucks instead of bikes, which he had originally used in the 1991 film. Ajay’s entry in ‘Phool Aur Kaante’ became very popular, where he was seen balancing on two moving motorcycles. He has repeated similar stunts in many films like ‘Son of Sardaar’ and ‘De De Pyaar De’.