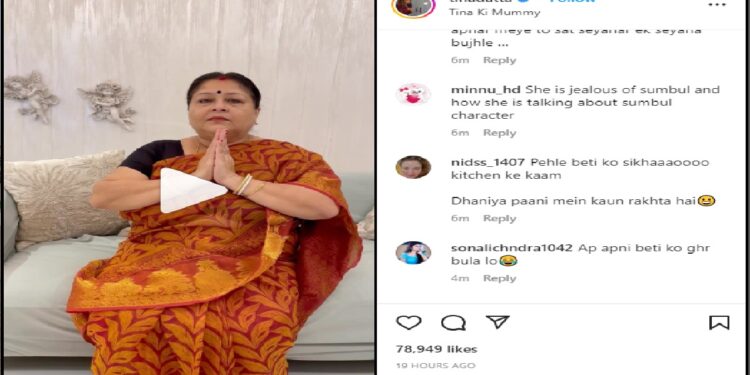 New Delhi. In Bigg Boss 16, however, one or the other spectacle is seen in the show every day. There is a fight between the contestants of the show every day and Sumbul Touqueer Khan, Shaleen Bhanot and Tina Dutta have often been seen fighting for one reason or the other. Now his family members have also jumped into this fight. Recently, it was seen in Bigg Boss 16’s Weekend Ka Vaar, Salman spoke a lot to Sumbul about Shaleen. After which the matter of these three seems to be catching up. On the other hand, on Monday, Sumbul was made to talk to his father, in which Subul’s father explains a lot to Subul and asks him to stay away from Tina and Shaleen. Along with this, Shaleen and Tina were asked to show their status and also abused Tina a lot, after which the matter has increased further.

Now in the midst of all this, Tina Dutt’s mother has shared a video from Tina’s official Instagram, in which Tina’s mother says, “Namaste main Tina Dutta’s mother. Because I didn’t get the chance that other contestant’s parents got, that’s why I want to talk to you. My daughter was abused on National TV, her father says kick her in the face. Who are you to abuse my daughter. If your daughter is going wrong then what does it mean that you will abuse my daughter. Tina’s mother further says that you can imagine what would have happened to me when my daughter was abused, she was called bad words. However, after this post by Tina’s mother, everyone has started trolling her mother only.

A user wrote on Tina’s mother’s video that it is not right to humiliate someone on national TV because of your jealousy. If something is going wrong, it can be handled in another way. So there the other user wrote that your daughter insulted Sumbul then you didn’t say anything. On the other hand, one wrote, do this, Aunty, you call Tina home, do not know which face she is showing.