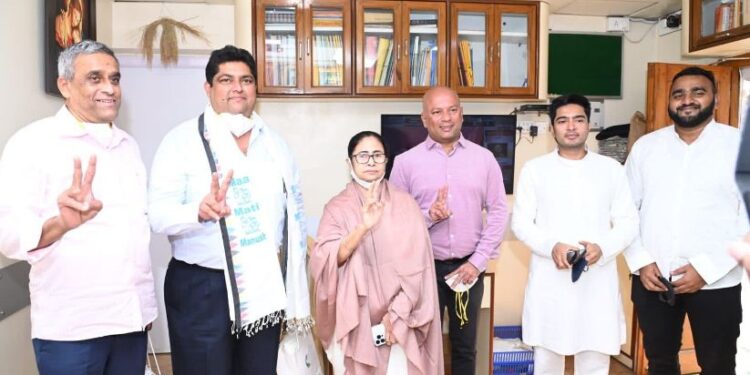 New Delhi. Even before the Goa assembly elections, political agitation in the state has intensified. Especially Mamata Banerjee’s Trinamool Congress (TMC) is continuously intensifying its campaign of expansion. Meanwhile, Congress has suffered a major setback in Goa. Congress leaders are continuously leaving the party. On Tuesday, another party MLA quit the Congress. Party MLA and senior leader Alexo Reginaldo Lourenco has left the Congress and joined the Trinamool Congress. In fact, Lourenco had reached Kolkata a day earlier, after which speculation had intensified that he would join Mamta’s party.

Even before the Goa assembly elections, the Congress is facing constant setbacks. Now party MLA Alexo Reginaldo Lourenco has also joined the Trinamool Congress by leaving the party. Lourenco joined TMC on Tuesday in the presence of TMC Chief and West Bengal Chief Minister Mamata Banerjee and her nephew Abhishek Banerjee.

Congress party recently released its list of 8 candidates for Goa assembly elections. Lourenco’s name was also on this list. Despite this, Lourenco resigned from the party and joined the Trinamool Congress. In such a situation, the sharp reaction of Congress has also come to the fore. Congress called it a betrayal. Also said that those who cheat the party in this way will have to face the consequences.

Voters will teach a lesson

The Congress said Lourenço would be taught a “right lesson” by the voters of his constituency. Let us tell you that this is not the first case when a Goa Congress leader has joined TMC. Earlier, former Chief Minister Luizinho Faleiro had also left the Congress and joined the Trinamool Congress.

Also read: Rahul Gandhi’s attack on Modi government, said – before 2014, did not even hear the word Lynching, know what BJP said

TMC on the path of party expansion