Get ready! A powerful pickup truck is coming ready on the platform of Toyota Fortuner, the company released the official teaser. Toyota Hilux on platform of Fortuner Debuts on website bookings start | AnyTV News

by AnyTV
in Automobiles, Latest News
Reading Time: 2 mins read
4 0
A A 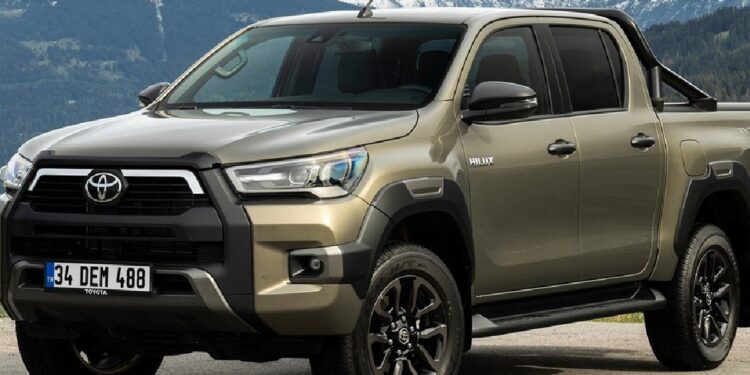 It’s just 14 days since the new year began, and Toyota India is gearing up to launch its second car. Recently the company introduced the new Camry Hybrid in India. After which the company is now going to launch the Hilux pickup truck. The upcoming Hilux is based on the same IMV-II platform that underpins the Innova Crysta and Fortuner. By launching the Hilux in India, the Japanese company is looking to target a different segment of buyers who prefer vehicles of this size.

The design shows a glimpse of the Fortuner

The Toyota Hilux comes equipped with an oversized hexagonal front grille, which is surrounded by swept-back headlamps on either side. On the other hand, the grille in matte finish is surrounded by black bezels, while a thick strip of chrome at the front provides good contrast. At the same time, before the launch, Toyota Hilux has made its debut on the official website, and interested buyers can book this pickup online, for which the company has kept a booking amount of Rs 1 lakh across India, and its delivery will start from March 2022. .

Up to 5 years warranty with single engine option

Let us tell you that Toyota has also released a new teaser video of this pickup, whose caption reads – Get ready for a richer life. Toyota offers the Hilux in India with the same engine option (2.8-litre diesel unit), which powers the Fortuner as well. This engine is rated to produce 204 hp power and 420 Nm torque mated to a 6-speed manual gearbox. However, it will be interesting to see whether Toyota will introduce a single cab variant of the Hilux for commercial purposes on the same lines as the Isuzu D-Max.

Also read: Now no vehicle will be sold without this feature, Nitin Gadkari tweeted information

The Toyota Hilux will be equipped with 4WD as well as an electronic differential lock. Which the company will launch in five color options – Red, Grey, Silver, Pearl White and Super White. Talking about the price, the standard warranty of the Hilux in India will be 3 years or 1 lakh km. At the same time, customers can also extend the warranty up to 5 years / 2.2 lakh km.