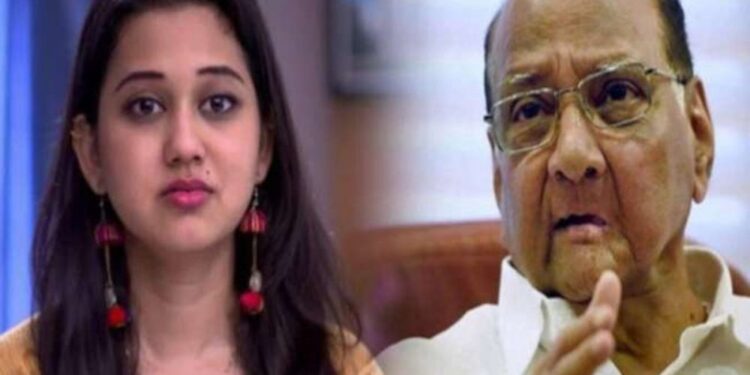 New Delhi. Marathi actress Ketki Chitale, who made controversial remarks on social media against NCP leader Sharad Pawar, has been taken into custody by the police. The actress reportedly shared derogatory remarks against Pawar. In reference to Sharad Pawar, it was said that ‘hell awaits’ and ‘you hate Brahmins’. At the same time, when the post shared by the actress came to light, strict action was taken against the actress by registering a case. Let us inform that Kalwa Police has registered a case against the actress after taking cognizance of the said matter.

The actress reportedly shared a Facebook post in which she made controversial remarks with reference to Sharad Pawar and Uddhav Thackeray. On the other hand, after taking cognizance of the said matter, the police said that on the basis of the complaint of Swapnil Netke, a case has been registered against Ketki Chitale at Kalwa police station in Thane on Saturday, who alleged that the actress posted objectionable material against Sharad Pawar. The police also said that the alleged post of the actress may lead to bitterness in the relations between two political parties in Maharashtra. Let us tell you that at present there is a coalition government of NCP, Shiv Sena and Congress.

In such a situation, the above tweet made by the actress is considered quite serious. It may be noted that Maharashtra Police has registered against the actress under sections 500, 501, 505(2), 153A of the Indian Penal Code. At the same time, expressing anger over the said tweet of the actress, Maharashtra Housing Development Minister and NCP leader Jitendra Awan said that in the coming days, cases will be registered in all the police stations of Maharashtra in respect of the post made against the actress. However, after the actress’s post, the politics of Maharashtra has heated up. Now in such a situation, what does this whole matter take in future. All eyes will be on this.

Big action will be taken on the tainted examination centers in the recruitment of Inspector, Police Recruitment Board has collected digital evidence of disturbances

Big action will be taken on the tainted examination centers in the recruitment of Inspector, Police Recruitment Board has collected digital evidence of disturbances