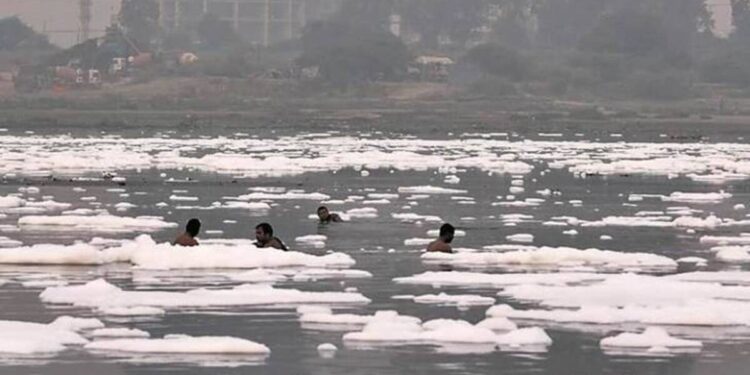 In the last few decades, pollution in rivers has increased at a much faster rate. This is also a matter of serious concern because it is directly affecting humans. If the rivers get polluted and will not survive then how will we be able to live on earth. The kind of situation prevailing today and most of the rivers are counting their days facing the brunt of pollution, is a big warning.

Rivers have been of special importance in Indian culture since time immemorial. It is believed that by remembering the holy rivers in the morning, one gets success in life. In this way, rivers have contributed immensely in the development of civilization. In Indian culture, rivers are considered equivalent to goddesses anyway. The origin of many rivers, including the Ganges, has been linked to the gods. In the origin of linking the existence of divine powers to the flow of rivers, perhaps the intention must have been that we should accept the importance of rivers.

The development of human civilization also took place on the banks of rivers. In the course of time also, due to the easy availability of water, the structure of the settlements on the banks of the rivers became dense. Gradually these settlements took the form of big cities. More than ninety-seven percent of all water sources on Earth are salt water, and most of the rest is frozen in the form of icebergs.

Most of the major rivers have emerged from these frozen water sources. A large part of the Earth’s population is dependent on rivers for the availability of drinking water. This is the reason that in ancient times, special attention was paid to maintaining the purity of the flow of rivers. Will anyone believe that according to a common belief of astrology, a person who throws dirt in the water of rivers gets the curse of maternal debt.

The psychological fact of this belief is that people should not throw dirt in the water of rivers. But we rejected the traditional beliefs and the result was that the rivers which were once considered so holy that the belief of washing away the sins of births by just bathing in them became so polluted that their water was potable. Didn’t even save.

There were two extreme reasons at the root of this situation. In our insistence on being too logical, instead of trying to understand the traditions, we started blindly following them. In ancient times, travelers passing through the bridge over the rivers used to put some coins in the water of the river to express their reverence for the rivers. This was the period when coins were made of copper or silver. Copper and silver have natural properties of purifying water.

That is, symbolically, man used to make a partial contribution to the ritual of maintaining the purity of the river-water. But even when coins of lead or other metals began to be minted, we continued to pour coins into the river. The belief associated with rivers washing away sins also became the reason for their pollution. Thousands of half-burnt or unburnt bodies were thrown into rivers during the Corona period. Imagine how much the river water must have been polluted by this?

In the last few decades, pollution in rivers has increased at a much faster rate. This is also a matter of serious concern because it is directly affecting humans. If rivers get polluted and will not survive, then how on earth will we be able to live? The kind of situation prevailing today and most of the rivers are counting their days facing the brunt of pollution, is a big warning. Some time ago a survey by the Center for Science and Environment revealed that the water content of most of India’s rivers has exceeded dangerous levels of lead, cadmium, arsenic, nickel, chromium, iron and copper.

The survey found high levels of two or more toxic metals in samples taken at a quarter of the monitoring stations spread across one hundred and seventeen rivers and tributaries. For this pollution, the toxic metals released into the environment by mining, scrap industries and various metallurgical industries are responsible, but our modern lifestyle is also responsible for it no less.

A river like the Ganges, starts getting polluted at the very beginning of its total flow area of ​​about two and a half thousand kilometres. More than a dozen drains pour more than forty five crore cubic liters of dirty water into the Ganges in a flow of four and a half hundred kilometers of Uttarakhand. In Uttar Pradesh, Bihar, Jharkhand and West Bengal, the same behavior has to be endured by this holy river. The Ganges has been found to be one of the ten most polluted rivers in the world.

Another study has found that the Ganges River is one of the world’s rivers which carry the most waste to the sea. Imagine, the river which is said to be life-giving, how the waste going to the sea along that river would be affecting the environment and the health of the aquatic animals? When this is the condition of a river like Ganga, then the misery of other rivers can be easily estimated.

The white foam rising in the Yamuna tells the story of its pollution. The water of Damodar River, once considered the lifeline of Jharkhand, has become so polluted that according to the Environment Department itself, its water is not potable at many places. The Subarnarekha river was once called the Ganga of Jharkhand, but now it is not even fit for bathing.

A report of the Madhya Pradesh Pollution Control Board states that the Narmada is the most polluted in Amarkantak. The level of chloride and soluble carbon dioxide in the water of Narmada on the banks of pilgrimages like Amarkantak and Omkareshwar has become alarming. More than a dozen rivers that keep Uttar Pradesh’s Purvanchal green are in a state of death. The condition of Gomti, Peelinadi, Magai, Gadai, Tamsa, Vishahi, Chandraprabha, Son river etc. is in bad shape.

In fact, some ceremonies and rituals on the banks of holy rivers have played no less with the sanctity of the water, as we float the puja material or the idols used in the worship into the river thinking that they can be immersed in the water. Flowing will not incur sin. While doing this we forget that the chemicals or certain ingredients used in preparing this material act as a suffocating water.

Apart from toxic metals, pollution is also increasing badly due to chemical drugs in the water of rivers. This was revealed in a research on two hundred and eighty-eight rivers of one hundred and four countries of all the continents of the world. More than a hundred scientists of the world were involved in this research. Surprisingly, elements of various drugs, including the anti-epileptic drug carbamazepine, the diabetes drug metformin and caffeine, were found in dangerous quantities in the waters of the rivers.

These elements enter rivers with human waste, untreated sewerage, riverside waste or untreated waste from pharmaceutical companies. In nineteen percent of the places, researchers have found the presence of bio-resistant in the river water at dangerous levels. It is also emerging as a new global threat to the environment.

Caffeine, nicotine, analgesics, antibiotics, anti-depressants, anti-diabetic, anti-allergic drugs have been found in samples from India. The increasing pollution due to medicines in rivers has also started scaring vulnerable people, because this pollution can indirectly affect the lives of crores of people.