The inner contradictions of BRICS 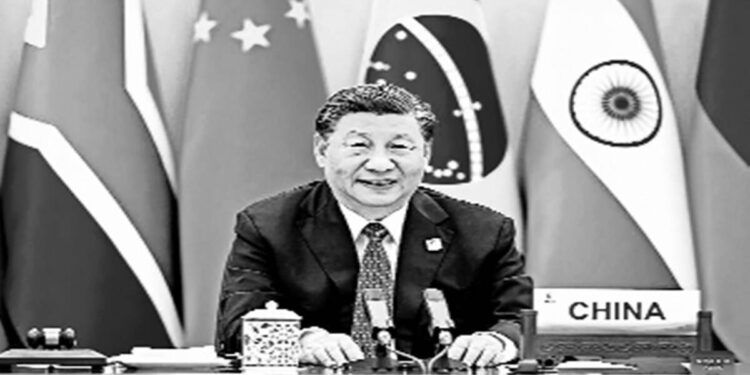 The foundation for the formation of BRICS was laid twenty years ago. Then the motive behind this was to create an alternative economic system away from the American economic structure. It was a good idea, but it didn’t work out well. Therefore, from 2009 onwards, questions were being raised on the propriety of BRICS.

Recently in the Fourteenth Summit of the BRICS countries, the member countries said different things. Russian President Vladimir Putin targeted the US and Western countries and condemned the imposition of economic sanctions on Russia. Along with this, he blamed these countries for the current global economic crisis. On the other hand, underlining the positive aspect, Prime Minister of India, Narendra Modi emphasized on making the world economic system better and democratic and also made better health system a part of his speech to deal with the epidemic. Whereas China advised the world to avoid cold war. South Africa and Brazil also mentioned the pandemic and the contribution of BRICS in dealing with it. This made it clear what are the priorities of the BRICS member countries.

If we look at the significance and dynamics of BRICS in a nutshell, then many discrepancies and contradictions are visible. The kind of standoff between India and China and the aggressive stance of China towards India, the unity of BRICS is affected somewhere. China is adamant on its insistence regarding the latest controversies. India supported China in every trouble from 1950 to 2019. Despite this, in the eyes of China, India is not an ally, but an adversary, this thinking created a rift between the two countries.

The situation that India is facing today between BRICS and Western diplomacy has rarely been created before. But the skill with which India has balanced the Quad and BRICS is no less a big deal on the foreign policy front. Two BRICS members India and South Africa are also present in the G-7 meeting in Germany. Also, there will be pressure on India, Brazil and South Africa to leave a neutral policy in the United Nations on the issue of Ukraine war. Whereas India has already made its point clear.

Questions are also being raised about the relevance of BRICS. Actually China is trying to expand BRICS. China’s plan behind creating BRICS Plus is that it can create a new group parallel to American and Western powers. But whether his efforts will be successful is the big question. It is not clear what role India, Brazil and South Africa will play if BRICS expands. Significantly, India is also an important member of the US-led Quad group.

The foundation for the formation of BRICS was laid twenty years ago. Then the motive behind this was to create an alternative economic system away from the American-born economic structure. It was a good idea, but it didn’t work out well. Therefore, from 2009 onwards, questions were being raised on the propriety of BRICS. Now the apprehensions are deepening that under the guise of expansion of BRICS, its disintegration may not start. There are reasons for this.

The first reason is that China wants to expand BRICS on its footsteps. Its effort is to include some countries from the G-20 organization in BRICS. It also has Indonesia. Significantly, India’s relations with Indonesia are good. China will also try to include two important countries of Africa – Nigeria and Senegal in BRICS. As soon as they join, the importance of South Africa in the organization will start decreasing. Taking them into the camp without the consent of South Africa can lead to the disintegration of BRICS.

Similarly, Argentina does not have good relations with Brazil. It would also be a no less complicated situation if Argentina were to be taken into BRICS without Brazil’s consent. There are many other countries in the list of China. China is trying its best to create a new camp that can challenge America and its dominating camp.

The second reason is that the economic base of BRICS is still very weak. At present, the total population of the five countries is close to forty percent of the world. The GDP of the five countries is a quarter of the global GDP. The economy of twenty five trillion dollars is eighteen lakh crore only part of China, while India is in second place with 3.5 lakh crore. The situation in the remaining three countries is very critical. Brazil and South Africa have been left far behind in the global pandemic. The mutual trade of BRICS has come down to barely 20 per cent. In such a situation, can it be expected that BRICS will be able to match the European Federation or the G-7?

Third reason The Ukraine war has created a new trouble. Once again the world is divided into two camps. A new Cold War seems to be beginning. The Ukraine war has led to a steep rise in the prices of crude oil and natural gas. In fact, China is engaged in the exercise of forming its own quartet regarding this war. A militarily strong Russia is becoming completely weak economically. The war has made his condition worse. That is why China wants to form a faction with Russia that can fulfill its dream of becoming the abbot of the world. For this, he is also ready to play the cards of attack on Taiwan.

The fourth reason is that China is following an increasingly expansionist policy. Sri Lanka, Pakistan, Malaysia, Australia and many African countries are facing the brunt of this wickedness of China. As far as India is concerned, there is a serious conflict going on between India and China for two years. Although China is not seeing this as a serious border dispute, it has become a very delicate issue for India. India has made it clear that before the withdrawal of the Chinese army from the disputed sites, only then further talks will be possible. It is natural for all the countries of the world to be worried about the way China has conspired to operate the global order in its own way in the last few years. There has never been more fear and doubt in front of the world as it is today about what would happen if China became the head of the world?

Now the equations of global politics are changing rapidly because of the Ukraine war. China will try to pressure India to stand with Russia and China on the issue of Ukraine. But the way India is following the policy of neutrality, it is not easy. In such a situation, if some such decisions are taken in BRICS under pressure from China and Russia, which would be contrary to the thinking of other members, then it can lead to a kind of split in BRICS and questions can be raised about its relevance. Right now the eyes of the major countries of the world are fixed on India. This is also a time of litmus test for Indian diplomacy. However, India has made it clear from the beginning that its foreign policy on the issue of Ukraine is and will remain neutral.