by AnyTV
in Latest News, Mobile, Technology
Reading Time: 2 mins read
0
A A 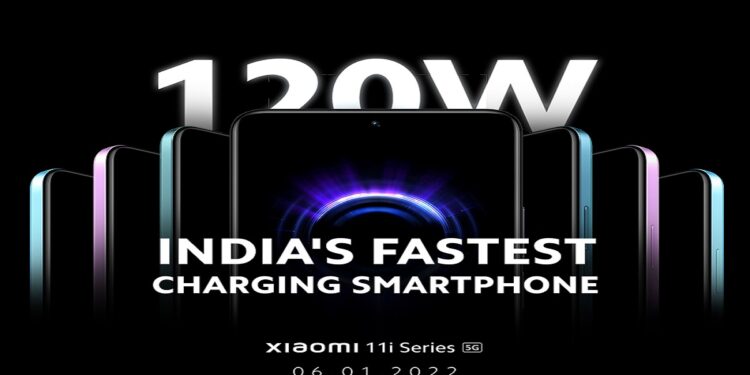 Xiaomi is going to launch its new smartphone Xiaomi 11i HyperCharge in India on 6th January. The most important thing about this phone is that its battery will be charged from 0 to 100% in 15 minutes. Under the new series, the company can also launch Xiaomi 11i, which will be the base variant handset of this series. Xiaomi 11i HyperCharge is the first smartphone in India that will support fast charging of more than 100W.

In 11i Hypercharge, the company is going to provide 120W hypercharge technology. With the help of this technology, the 4500mAh battery will be fully charged from zero in just 15 minutes. It is being told that the Xiaomi 11i Hypercharge can be a rebranded version of the Redmi Note 11 Pro +. 120W charging has been given in this phone launched in China.

Features of Xiaomi 11i Hypercharge:
Xiaomi 11i Hypercharge can be similar to Redmi Note 11 Pro + in terms of features. Redmi Note 11 Pro + has a 6.67-inch Full HD + AMOLED display with a refresh rate of 120Hz. The phone is equipped with up to 8GB of LPDDR4x RAM and up to 256GB of internal storage. As a processor, MediaTek Dimensity 920 chipset has been given in this phone.

Camera will be like this:
If we talk about the camera, then the triple camera setup with LED flash has been given in the rear of the phone. It includes a 108-megapixel primary camera with an 8-megapixel ultra-wide angle lens and a 2-megapixel depth sensor. At the same time, you will get a 16-megapixel front camera in this phone for selfie.

Powerful battery will be like this:
To give power to the phone, it has a 4500mAh battery, which supports 120W fast charging. For connectivity, the company is offering options like 5G, 4G LTE, Dual Band Wi-Fi, Bluetooth 5.1, GPS, NFC and USB Type-C port in this phone.