by Aaryan Srivastav
in Sports
Reading Time: 2 mins read
0
A A 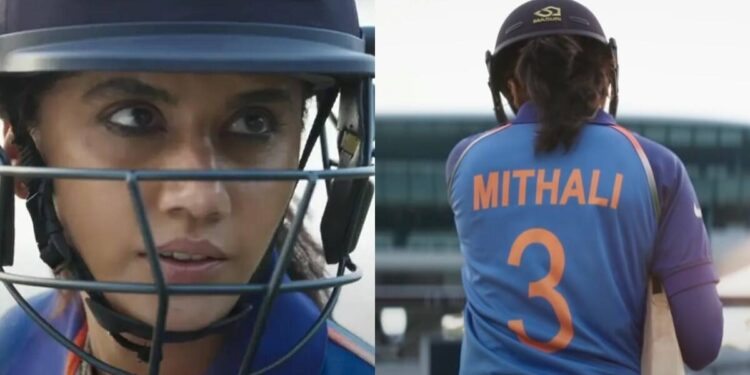 The teaser of Shabaash Mithu, the biopic of Indian women’s cricket team veteran Mithali Raj, has been released on Monday. In this teaser, for the first time, actress Taapsee Pannu is seen holding a bat in the look of Mithali Raj. Taapsee Pannu is very fond of the look of the Indian cricketer and she herself has shared its teaser on her social media.

The same video was shared by Mithali Raj herself on Twitter with the same caption. In the caption of this teaser video, it is written that, in the game of Gentleman, he made history and made his own story. However, the release date of this film has not been announced yet. Talking about this teaser video, commentary plays in it and Mithali Raj’s records are shown on the screen.

The video begins with applause from the audience on the playground. English and Hindi commentary continues throughout the teaser and Mithali Raj is seen getting ready from the dressing room and holding a bat in the field. At the end of this teaser, Taapsee Pannu is seen playing the role of Mithali Raj. She has a bat in her hand and with a helmet in the Indian jersey, she is seen taking the strike.

Mithali holds the record for captaining the most matches in the World Cup as well as being the only female cricketer to score 10,000 international runs. She is also known as Lady Tendulkar. Recently he was also awarded the Khel Ratna Award by the Government of India.

Movies based on many sports, including Indian cricketers, continue to be made in Bollywood. Before this, many such films have been made including MS Dhoni, Azhar (Mohammed Azaruddin), ’83’ (1983 world winning team), Chak De India, Gol. On the other hand, talking about Taapsee Pannu, recently one of her sports based film Rashmi Rocket came. Apart from this, she was also seen in Shooter Dadi.