Thomas CUP: India created history in badminton, made it to the final of Thomas Cup for the first time in 73 years 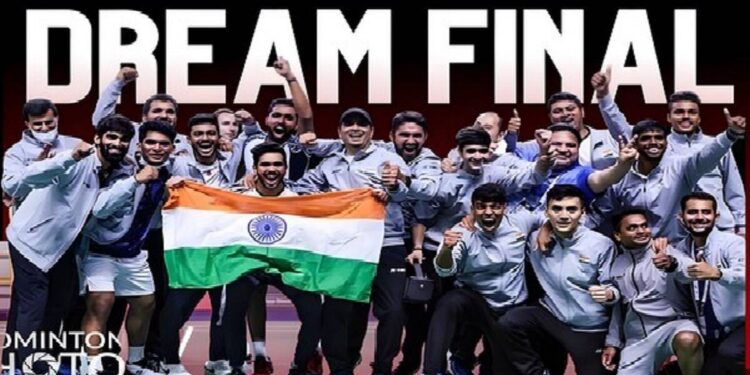 HS Prannoy displayed scintillating spirit in the deciding fifth match as the Indian men’s badminton team scripted history by beating Denmark 3-2 in a thrilling semi-final here. The Thomas Cup was started in the year 1949. For the first time in 73 years, the Indian team has reached the final. The Indian team had never progressed beyond the semi-finals since 1979, but showed a fighting spirit to beat 2016 champions Denmark.

World Championship silver medalist Kidambi Srikanth and world number eight doubles pair of Satwiksairaj Rankireddy and Chirag Shetty kept India in the race for the final, but HS Prannoy helped the team create history after a 2-2 draw. . Prannoy also suffered an ankle injury after slipping on the court against world number 13 Rasmus Gameke, but the Indian continued his fight after taking a ‘medical timeout’.

He was seen in pain on the court, but despite this trouble, he registered India’s name in the pages of history by registering a 13-21 21-9 21-12 victory. It was a stellar performance by the Indian team, which ended a 43-year wait for a place in the semi-finals by defeating five-time champions Malaysia 3-2 on Thursday.

Also Read
What will Djokovic be able to break Nadal’s dominance over the red gravel?

World Championship bronze medalist Lakshya Sen, however, could not replicate his performance and went down 13-21 13-21 to Viktor Axelsen to give Denmark a 1-0 lead. Rankireddy and Shetty won the first doubles match. The Indian pair beat Kim Astrup and Mathias Christiansen 21-18 21-23 22-20 in the second match to level India at 1-1.

World No. 11 Srikanth then beat world No. 3 Anders Antonsen 21-18 12-21 21-15 to take a 2-1 lead. India’s second doubles pair of Krishna Prasad Garaga and Vishnuvardhan Goud Panjala lost 14-21 13-21 to Anders Skarup Rasmussen and Friedrich Sogard. With this both the teams were tied at 2-2. But the experienced Indian Prannoy came back after losing the first game to guide his team to victory.