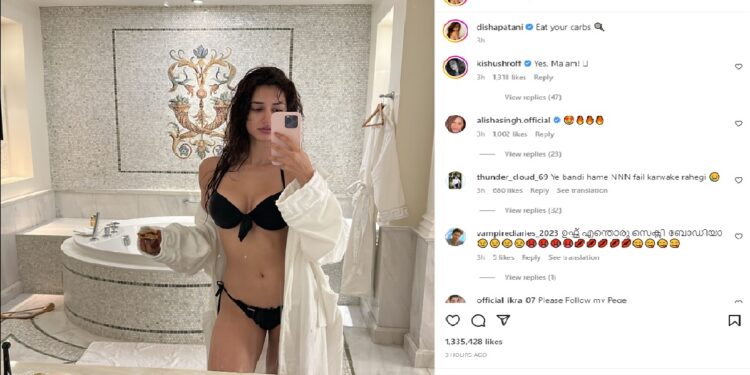 New Delhi. Disha Patani is one of the fittest actresses of Bollywood. The actress mostly keeps diving into the sea of ​​headlines for her looks. The actress attracts the attention of her fans with her style. Disha remains very active on social media and keeps posting one photo or video every day. Seeing his new look every day, the fans also eagerly wait for his different style. Whenever the actress comes on the screen, her fans get lost seeing her. The actress is counted among the beautiful actresses of Bollywood. Recently, the actress shared a photo, seeing which the fans are not tired of praising her-

Her fit look has often been seen on social media and when it comes to Disha’s mirror selfie, no one can match her. The actress has shared a picture on social media in which she is looking very hot and seeing her look, even the fans are not able to stop themselves from commenting on this photo of her. In this photo, the actress has appeared in a black bikini. On top of this, the actress is wearing a white shirt in it. In which everyone is praising the actress after seeing her body and talking about her fitness.

Seeing this photo of Disha, the fans are reacting a lot on it. In this, the weight and messy hair of the actress are adding charm to her look. On this photo, Disha wrote in the caption – Eat your carb. At the same time, Tiger’s sister Kishu Shroff has also commented on this photo.