Maulana Badruddin Ajmal’s pain spilled when a bulldozer ran on a madrasa included in a terrorist module in Assam, said… 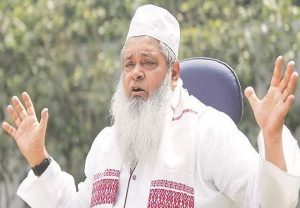 New Delhi. For some time now, there have been cases of ill-treatment in madrassas in the country. Recently, a madrasa in Morigaon, Assam was bulldozed. This action was taken by the administration under UAPA and Disaster Management Act. Let us inform that in the past, the police in Assam had arrested some suspects associated with the Al Qaeda module. The accused who were arrested by the police included Mustafa alias Mufti Mustafa, who runs the madrasa in Morigaon. After this action on the madrasa, the children who were studying were admitted to different schools.

Now in this matter a big statement of Maulana Badruddin Ajmal, President of All India United Democratic Front has come to the fore. Badruddin Ajmal made many sharp statements in Guwahati. Talking about the bad behavior in madrasas, Badruddin Ajmal said that if bad elements are found in madrasas, then we have no sympathy for those people. Wherever the government finds such elements, they should be shot. If 1-2 bad teachers are found in a madrasa, the government should take them into custody and pick them up after the investigation is over. After that the government should do whatever it wants with them.

‘Wrong to defame the whole society for one’s mistake’

Further, Maulana Badruddin Ajmal said that, it is not right if the entire Muslim society is called Jihadi for the fault of one. This is not Jihad, this is terrorism. The government should stop this. They should protect their borders and strengthen intelligence.

#WATCH , Guwahati:AIUDF chief says, “…India’s money is with FM. How will she know how much a person spends to buy? No inflation for any Min. BJP MPs should ask their wives how’re they running the kitchen. Govt should take note otherwise inflation will eat up their Govt in 2024” pic.twitter.com/B1Tk4IChwZ

Said this thing about inflation

Accusing the government on the issue of inflation, Maulana Badruddin Ajmal said that “the money of the country is with the Finance Minister. How do they know how much someone spends to buy something? There is no inflation for any minister. BJP MPs should ask their wives how they are running the kitchen. The government should pay attention to this, otherwise inflation will eat up their government in 2024.”