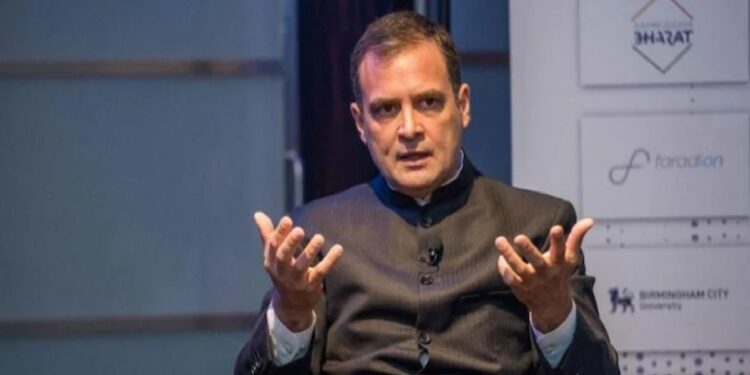 New Delhi. Former Congress President Rahul Gandhi remains in the discussion every day because of his statement. Please tell that Rahul Gandhi is in London these days. But like many of his previous tours, he does not seem to be leaving him with controversies regarding this round. In fact, on Monday, Rahul Gandhi interacted with students at Cambridge University on the issue of ‘India at 75’. During this, the Congress leader said something like this from foreign soil. After which he came into the limelight. Not only this, many people disliked his statement that people also put his class on social media. Meanwhile, Siddharth Verma, an Indian Civil Service officer present in the program, did not like his words and Siddharth Verma taught Rahul Gandhi the lesson of nation, India and Chanakya’s nationalism in the meeting. The video of which he has also shared on his Twitter handle.

It can be seen in the video that Siddharth Verma, protesting against Rahul Gandhi’s point, asks him that, you mentioned an article of the constitution, in which India is called a union of states. But if you turn the page and look at the preamble, India is described as a nation there. There is also a fight between Rahul Gandhi and him in the video. All eyes are on Siddharth Verma present there. Apart from this, Varma further says that India is one of the oldest civilizations in the world and the word Rashtra is also mentioned in the Vedas.

At the same time, filmmaker Vivek Agnihotri has also reacted to Siddharth Varma’s tweet. He praised Siddharth Verma for teaching Rahul Gandhi the lesson of nationalism.

Brilliantly articulated and composed questioning. More power to you Siddhartha. I am coming to @Cambridge_Uni in few days. See your there.

Excellent…I wish I could have been there to school him a little morehttps://t.co/c9JMKwotkp

You have explained him the definition of BHARAT in a very composed & brilliantly way, closing with a Bang On Question !! Kudos to you..