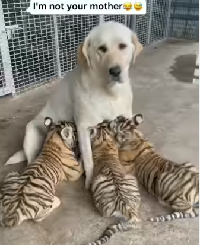 Every day some video goes viral on social media. You must have seen such videos on social media in which an animal of another species is seen loving or feeding the offspring of an animal of another species. Often in such cases monkeys or chimpanzees are seen feeding the young of other species. But now even the dog is not left behind.
Recently, a video has surfaced on social media in which a dog can be seen feeding milk to a tiger cub. This is heart touching video in which a bitch is nursing a tiger cub. It is being liked a lot by social media users. Doggy is getting a lot of praise on social media for calling this tiger cub.
This video has been shared on social media on Instagram page named Natural Beauty. This video is of a zoo where a bitch can be seen surrounded by three tiger cubs. Seeing the video, it can be guessed that the tiger cubs are not attacking the bitch but are fulfilling the lack of mother’s milk for their upbringing. While sitting quietly, the bitch is feeding them milk.

Let us tell you that in this video the bitch can be seen showering affection on her children like a mother. Social media users are shocked to see this video. A large number of users are giving feedback on this. One user said, “It’s amazing how much animals love and nurture other animals when humans want to abort their babies.”