Madhya Pradesh buried under the debt of 2.5 lakh crores, now Shivraj government will get the statue of Adi Shankaracharya installed at a cost of 2 thousand crores

by AnyTV
in Latest News, Politics
Reading Time: 3 mins read
0
A A 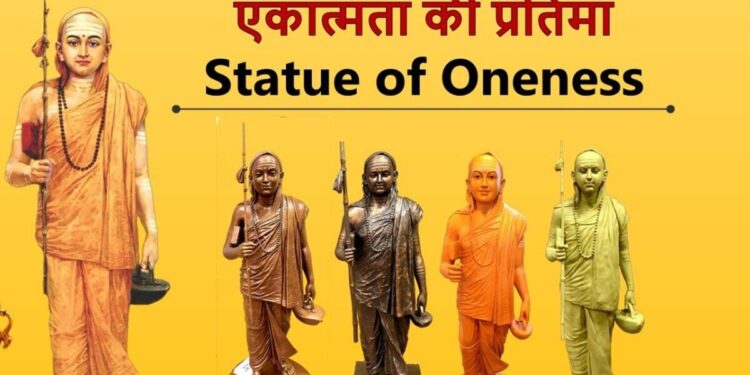 The Madhya Pradesh government has announced a project worth Rs 2000 crore. Under this, 108 feet high statue of Adiguru Shankaracharya will be made. Apart from this, Adiguru Shankaracharya International Museum will also be built, which will work to connect Madhya Pradesh with the world. Chief Minister Shivraj Singh held a meeting with the Board of Trustees of Acharya Sanskrit Ekta Nyas only last week. In this meeting, there was a very long discussion about this project. Trust member and eminent saint Avadheshanand Giri were also present in this meeting.

CM Shivraj Singh Chouhan said, “A 108-feet multi-metal statue of Adiguru Shankaracharya in Omkareshwar and will connect Madhya Pradesh with the whole world through International Vedanta Sansthanam.” Shivraj Singh Chouhan has named the statue of Adiguru as “Statue of Oneness”. This 108 feet high statue will be installed on a 54 feet high platform. Pratima and Shankar Museum will be built on about 7.5 hectares of land. Gurukulam will also be built in 5 acres on the other side of Narmada, Acharya Shankar International Advaita Vedanta Sansthanam will be developed in 10 acres.

Shivraj Singh Chouhan said, “With the installation of the statue of Shankaracharya at Omkareshwar, it will help in bringing Vedanta into practical life. This world has to be made one family, that is the purpose of this statue. The state government will act on all the suggestions given by the members of the trust. The government will move swiftly to give a concrete shape to the entire plan of action.

On the other hand, when the Congress was asked about this project, it shrugged off saying that when the budget is allocated, it will be discussed. Congress leader Kamal Nath said that this announcement of Shivraj government should not be taken seriously. When the money for this project is allocated in the budget, then it can be discussed. At present, the budget of the Madhya Pradesh government is 2.41 lakh crore, while the debt on it is 2.56 lakh crore. At present, every citizen of Madhya Pradesh has a debt of Rs 34000.

The opposition alleges that the Shivraj government has announced this project worth Rs 2000 crore at a time when the Rabi crop has been damaged in 18 districts of the state due to hailstorm. Recently, a video also went viral, in which a farmer is seen crying at the feet of former MLA Mahendra Singh Yadav as his crop was ruined due to untimely rains. BJP MLA from Ashok Nagar, Jaipal Singh has promised farmers that he will resign from his post if they fail to get them compensation for crop loss in a time bound manner.

Agriculture Minister of Shivraj government Kamal Patel said that the Revenue and Agriculture Department is conducting a survey of the affected villages and farmers will be given 25 percent of their compensation with immediate effect, so that farmers can get immediate relief.

The post Madhya Pradesh buried under the debt of 2.5 lakh crores, now Shivraj government will get the idol of Adi Shankaracharya installed at a cost of 2 thousand crores appeared first on Jansatta.