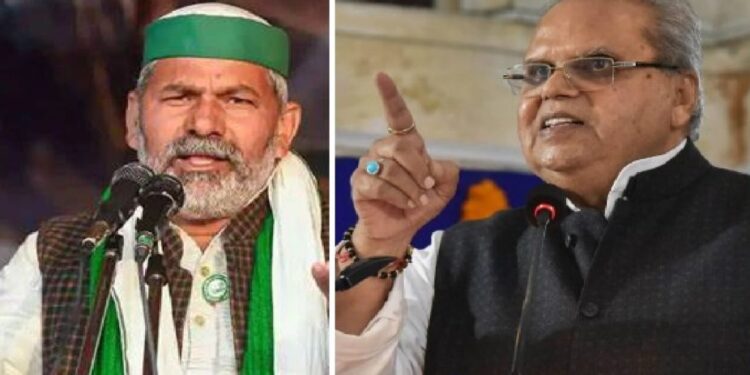 Jaipur / New Delhi. Former governor Satyapal Malik and farmer leader Rakesh Tikait have once again opened fire against PM Narendra Modi. Where Satyapal Malik targeted Modi by giving the example of Indira Gandhi. At the same time, Rakesh Tikait targeted the army by taking the name of Agniveer recruitment scheme. Let us tell you what both the leaders have said. First thing about Satyapal Malik. In the program of Rajasthan University Students Union in Jaipur on Sunday, Satyapal Malik said that Modi should understand that power is never permanent. He said that even Indira Gandhi had lost power. One day you too will leave. In such a situation, do not spoil the situation so much that it cannot be improved.

Satyapal Malik also said that many types of battles are going to take place in the country now. Farmers will also agitate and the youth will also get ready to open a front against the central government. Malik alleged about the Agniveer recruitment scheme in the army that by giving only 4 years of service to the jawans, they would not have the spirit of sacrifice. This can weaken the army. Satyapal Malik also claimed that the Agniveer jawans would not even get training to use BrahMos and other deadly weapons.

At the same time, according to Zee News, farmer leader Rakesh Tikait gave a statement about the Agniveer scheme in a program. This statement of Rakesh Tikait is very provocative. Tikait said that when Agniveer retires, he will become Krantiveer. What will be his fate, no one knows yet. Please tell that Satyapal Malik has been making statements against the Modi government for a long time. At the same time, Rakesh Tikait also keeps giving statements against BJP and Modi government since the time of farmer’s movement.