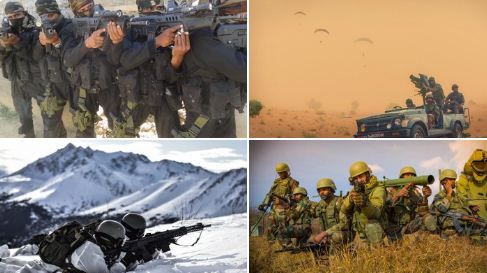 Today on 15 January, India is celebrating its 74th Army Day. The brave sons of the army are honored on this day. Prime Minister Modi had also congratulated the soldiers on the occasion. The Prime Minister said that humanitarians are the soldiers who help the civilians during emergency situations. In a tweet, the Prime Minister said that Happy Army Day to all. Specially to our brave soldiers and their families too. Indian Army is famous all over the world for its bravery. The contribution made by the army to the national security cannot be described in words.

Best wishes on the occasion of Army Day, especially to our courageous soldiers, respected veterans and their families. The Indian Army is known for its bravery and professionalism. Words cannot do justice to the invaluable contribution of the Indian Army towards national safety. pic.twitter.com/UwvmbVD1hq

In another tweet, Modi wrote that Indian Army personnel work in difficult conditions and are at the forefront of serving people even during natural calamities. He is very proud of the contribution of the army working as a peacekeeping force abroad as well. A wreath was laid at the National War Memorial in the capital Delhi to mark Army Day. In which the chiefs of the armed forces, General Manoj Mukund Naravane, Air Chief Marshal VR Choudhary and Admiral Aharikumar were present. Union Home Minister Amit Shah has also greeted the people on Army Day. He wrote, “Happy Army Day to the brave soldiers of the Indian Army, ex-servicemen and their families. And the commitment to the country is an inspiration for every Indian.”

Happy Army Day to the brave soldiers of the Indian Army, ex-servicemen and their families.

I bow to the indomitable courage, valor and supreme sacrifice of the brave soldiers who are always ready to defend the motherland.

Your selfless service, dedication and commitment towards the country is an inspiration for every Indian. pic.twitter.com/p7cuRE0BuR

Greetings to Army personnel and veterans on Army Day. Indian Army has been pivotal in ensuring national security. Our soldiers have displayed professionalism, sacrifice and valor in defending borders and maintaining peace. The nation is grateful for your service. Jai Hind!

President Ram Nath Kovind also said that he is grateful for the service of the country’s army. A tweet from Rashtrapati Bhavan said, “Happy Army Day to the soldiers and ex-servicemen. Indian Army has played a vital role in ensuring national security. Our soldiers have made professionalism, sacrifices in maintaining peace and security of the border. and displayed bravery.” Thank you Jai Hind for your service.”