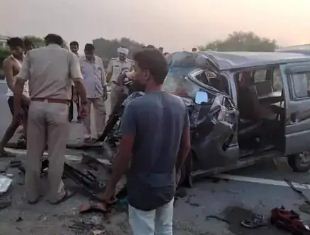 6 people died in a van full of 11 people

6 people died and 5 others got injured in a horrific road accident on National Highway No 12 in Chaksu, Jaipur on Saturday morning. All the injured have been admitted to the satellite hospital in Chaksu. All the injured were in a van and were on their way to take the writ examination. There were about 11 people in the van, in which 6 people died.

The terrible road accident took place near Nimodia. Where an Eco van had become uncontrollable and entered the truck. Apart from those who died in the incident, 5 people have also been injured, who have been admitted to the hospital. The condition of one of them is very serious, which has been referred to Jaipur.

The death of six REET candidates in a road accident in Chaksu is sad. I pray to God for the peace of all the departed souls. 2 lakh will be given to the kin of the dead and Rs 50,000 to the injured from the Chief Minister’s Relief Fund.