Viral Video: When the pet ‘lion’ attacked, then it happened 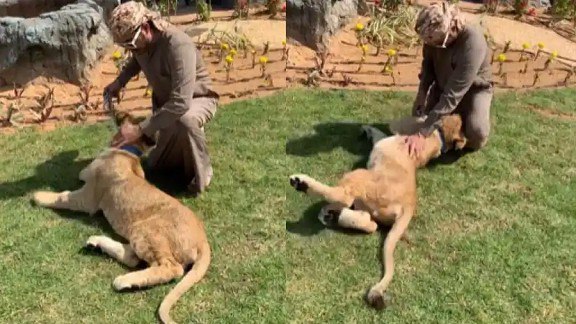 Sheikh of Dubai attacked by his pet

The first animals that come to mind when we name pet water are animals like dogs, cats or cows. Pets are very cute and rarely do you any harm but abroad, especially in Dubai, pets are a bit different. The kind of animals that Sheikh people keep as pets in their homes, you have hardly seen in any corner of the world.

Let us tell you that the people here are fond of raising terrible animals like lion and leopard, not dogs and cats. Although sometimes this hobby can overwhelm them. One such video is going viral at the moment, in which a lion cub suddenly attacks a person.

Imagine what would happen if a cheetah or a lion was seen walking on the road. It is clear that panic will spread in the entire area. But not only does the Sheikh of Dubai travel in cars with these terrifying animals, but you must have seen many pictures of them sitting on the lap of such animals on the internet. However, sometimes this hobby of theirs overwhelms them. Now watch this video going viral

In this viral video, you can see a sheikh playing with a lion cub. Meanwhile, Sheikh is scratching the child’s head with love. But the scene that unfolds in the second moment is heart-wrenching. This lion cub suddenly attacks Sheikh. However a man immediately reaches there and tries to free Sheikh from the clutches of the cub. This video has been shared on the social media platform Instagram with an account named Makdxb2364. They seem to be giving different reactions.