When the police interrupted for not wearing a mask, the women created a ruckus, scuffled with the police

by AnyTV
in Regional
Reading Time: 2 mins read
0 0
A A 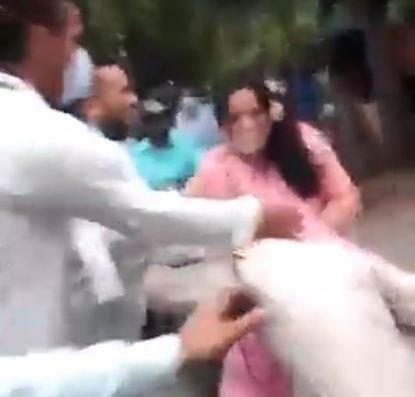 Scuffle with the police, threatened to take off the uniform

Recently, the video of a woman hitting a girl’s cab driver on the middle of the road became quite viral. In which without any fault the women had rained slaps on the cab driver. Something similar came to the fore once more where a woman manhandled the challaning team near Delhi’s Piragarhi metro station when she was interrupted for violating the Corona rules. The police arrested both the women who assaulted after the video went viral.

#JUSTIN: Two women have been arrested from Outer Delhi’s Peeragarhi metro station for allegedly assaulting a civil defense volunteer when she stopped one of them for not wearing mask. An FIR has been registered against both of them. @IndianExpresshandjob @ieDelhi pic.twitter.com/t1ev3Cj9Tx

Both the women were stopped for not wearing masks under the Corona rules and asked them to fill the challan. But the women did not listen and started abusing the officers. Police said that according to the complaint of Anand, who works in Punjabi Bagh SDM office, on August 6, he was doing his corona duty near Piragarhi station along with teacher Ajmer Singh and civil defense staff. Then he saw both the women without masks. Due to this, he called him and asked him to pay the penalty for the mask.

When asked to pay the challan, both attacked the team. The police had registered charges against the two women including various sections of the Indian Penal Code and Epidemic and Disaster Management Act.