Video: Virat Kohli turned out to be not only a good cricketer but also a singer, he tied the knot by singing this song 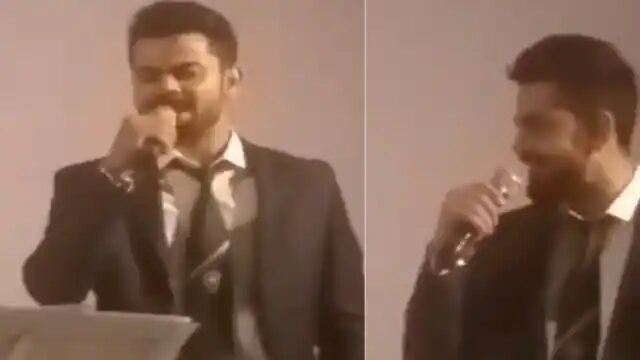 Whenever the name of Virat Kohli comes to mind, the picture comes to the fore while batting brilliantly on the field with a bat in hand. The former captain of the Indian cricket team achieved everything on the basis of his brilliant cricket and became the favorite of crores of people. Cricket changed the life of Virat Kohli and practiced a lot for it. But do you know that apart from being a cricketer, there is a great quality in Virat Kohli as well. He is good at singing songs. Yes, star batsman Virat Kohli also does singing and a video of him is also going viral on social media. The video looks a bit old in which Virat Kohli is seen singing a song ‘Jo Vaada Kiya Nibhana Paadga’.

Seeing Virat Kohli in the video, it seems that he is wearing the official blazer of the Cricket Board. That is, they are singing a song in a cricket related function. A woman is also present with him on the stage. Watching Virat Kohli sing a song is a very different and wonderful experience. This video of Virat Kohli singing has been shared by Harsh Goenka on his official Twitter account, which has become fiercely viral.

The woman turned out to be alive after being proved dead, know how this wonder happened

The woman turned out to be alive after being proved dead, know how this wonder happened

Little guest will come to Siddharth-Kiara’s house within two years of marriage! Know from astrology how will be the married life of the couple

This limited offer on Amazon, get Oppo A15s at a discount, pay only Rs 590