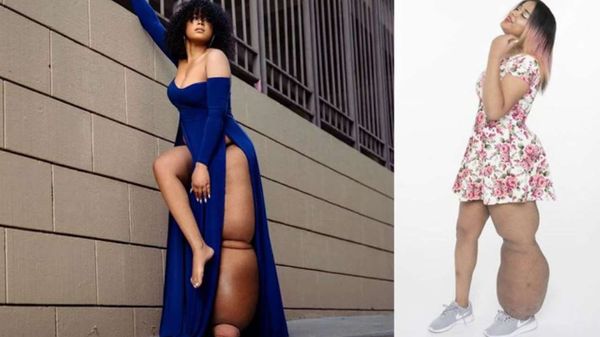 Due to a rare disease, the weight of one leg of the woman became 45 kg, got rid of the problem with confidence in the beginning

Mahogany, a 23-year-old model living in the US, was born with a rare disease called lymphedema. Due to this disease, excess fluid accumulates in some parts of the body. Due to this, one of his legs was swollen and the weight of his leg had become 45 kg. Till date no cure has been found for this disease. People used to make fun of mahogany feet since childhood. Slowly her confidence started to wane but she persevered and made a name for herself in the fashion world. Mahogany tells people, as beautiful as my heart is, I am also beautiful. Even today many people troll me on social media but I ignore them.

Let us tell you that during Mahogany modeling, instead of hiding her feet weighing 45 kg, she shows it in front of the camera. There is no cure for Mahogany’s disease. Mahogany is the eldest of her three sisters. Regarding her illness, she said that she was very worried when she came to know about her illness. His mother always stood by him in difficult times. She never thought she was beautiful. She says “I always thought that God has cursed me. Then I accepted myself and stepped into the modeling world and made a different identity.”
Also Read  Will Elon Musk buy Coca-Cola now? A tweet created a stir

In the beginning, mahogany found it difficult to walk with such a heavy weight, but gradually it became a part of life. Today he is active on every social media account. He shows his leg in the photo without any hesitation. At present, the weight of one leg of his is 45 kg. There was a time when people advised him to cut his leg. Mahogany is currently very happy in her life and she continues to inspire others.